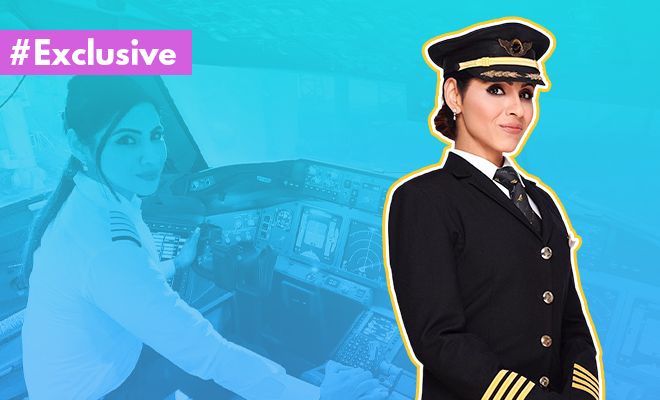 EXCLUSIVE! Captain Zoya Agarwal On Her Historic All-Woman Polar Flight And The Women Who Inspire Her

In the history of human existence, there have been many inventions and discoveries. But there are some that hold a special place in our hearts, minds and history books, and will never cease to be a marvel. Discovering fire, inventing the wheel. agriculture, electricity, the telephone, and of course, flight. I’d be Wright in saying that there could still be people in this world who’ve experienced all of the abovementioned things, and yet never flown in an airplane. There’s a certain novelty and wonder attached to it, which has, at some point, made every child dream of becoming a pilot, a flight attendant or an astronaut. Captain Zoya Agarwal, too, had such a dream of soaring across the blue sky when she was little. And today, as a pilot with Air India, she is the youngest to have flown a Boeing 777, and commanded the first ever all-woman flight to undertake the longest air route, that flies over North Pole.

Talk about lofty dreams, and not just achieving them but making history in the process!

On January 9, Air India’s all-woman pilot team, commanded by Captain Zoya Agarwal, flew over the North Pole on their way to Bengaluru from San Francisco. This is the world’s longest air route covering nearly 16,000 km. Although Air India pilots have flown this route before, what makes this flight special is that it marks the first time an all-woman team accomplished this journey.

Since the successful flight, Captain Zoya Agarwal and her all-woman flight crew have been showered with adulation and even called the ‘polar girls’. Everyone, from young girls whose dream it is to one day fly in the sky to Deepika Padukone and Prime Minister Narendra Modi, has been singing their praises. And why wouldn’t they? It does seem like a feat that requires skills, training and the confidence to face any unexpected challenges head on. What’s more, this isn’t just a flight; for many women, what Captain Zoya and her team accomplished is an inspiration that the sky is the limit for what they can achieve.

We had the opportunity of finding out, first hand, how Captain Zoya Agarwal pulled this off, how she felt in the days leading up to and during the flight and how it feels now that she has become a household name with this feat. Read on and get inspired!

Q:First, a huge congratulations to you, Captain Zoya Agarwal, for the feat you and your crew have achieved. It makes a fellow woman extremely proud. How does it feel having accomplished this?

A: My journey has been extremely exciting, electrifying, magical, I can go on and on with the adjectives. I’m truly blessed in this world because where I come from to reach where I’ve reached, it’s a milestone for all sorts for myself and something I really wanted to happen. When you really want something from your heart and soul you open in your hands, look in the sky and pray to almighty and it will happen. By god’s grace things have happened in an amazing way for me. Despites of all the challenges and everything else that has come my way I wouldn’t want to have this in any other way

Also Read: An All-Woman Pilot Team Will Be Flying Over The North Pole On The World’s Longest Air Route. They’re Making History

Q: For the laymen here, can you elaborate on what the challenges and risks are in undertaking such a long distance flight over the North Pole?

A: Life is a challenge, but as I previously said, if you truly want to do something and create a positive impact just believe in yourself and it will happen. You just have to manifest the positivity.

There are plenty of challenges in a polar flight, with which we’ve turned a page in the history of world’s aviation. We have been working non-stop behind this for about a year now. I was supposed to undertake this flight on International Women’s Day last day, but it did not materialize because there are so many factors to be considered in this sort of a flight.

For example, the challenges that we faced even now were equipments, many checks in the boxes that you have to do before a flight, crew training, pilot’s training, polar suits essentially used when you are flying closer to the north pole…. Your diversions are different, the air poles are different, average temperature of such poles are -30 to -40 degrees. When you open the door, you just can’t step out. You have to carry the polar suits which will cost you $5000 (INR 3,63,621) and they weigh around 32 lbs (14.5kg) each. It’s quite comprehensive clothing.

Once you check in all your boxes, which are many, the technical and weather Gods have to be with you! In the final stages of deciding the flight, the weather has to be perfectly okay over the north pole because you are going by the cosmic radiations. There is so much radiation when you are flying around the poles. You have to have the understanding of the parameters which are within the designated limits. You have fuel temperature limits, and so many other weather factors which should be perfectly fine for that particular day, so there are many challenges.

But what is life without challenge? You may encounter lots of hurdles in your journey but when you go through it truly and when you look back and see you’ve overcome that, and here you are now, it is all worth it!

Q: How was your mindset in the days leading up to the flight? Were you nervous, confident, excited?

A: I always believe in “I’m possible”. It’s never ‘impossible’; it is always “I’m possible.” I’m very positive as a person, so for me positivity is something that I like to surround myself with, and anybody who comes to me, I like to give the same positive energy, because if you keep passing on the same energy, the world becomes a better place for future generations. I don’t focus on negative thoughts, but concentrate on all the good things that I have around me.

Q: Was there any anecdote/memorable moment from during the flight that you’d love to share with us?

A: A memorable moment from the flight was when I announced that we had entered the polar region to all my passengers and they were superbly excited! They all started clapping and looking out of the window at the starry night. Even when we touched down in Bengaluru, the entire cabin was filled with applause, so much that I could hear it all the way to the fly deck. It was an extremely heartwarming event!

Q: I’m sure congratulations have been pouring in left, right and centre. Was there any particular person’s message or gesture that meant the most to you?

A: Yes, congratulations have been pouring in! But we were very humbled and motivated when Prime Minister Narendra Modi Ji mentioned us in his Mann ki Baat. I was short of words; my family was proud of my achievements. Moments like these make you realise the impact you’ve made on this world. I honestly feel I’ve just done my job, I’m just a tiny drop in the ocean. However, even if I’m a tiny drop, I’m grateful to have impacted the world in small ways.

We had been motivated and cheered by our teams, management, the Indian government, and our flight was monitored from the start. And everybody knew about how special this flight was, how groundbreaking. Everybody was supporting us through and through.

Also Read: Uttarakhand Is Getting Its First All-Woman Anti-Terrorism Squad That Will Secure Mahakhumbh 2021. They Sound Badass!

Q: The COVID pandemic has hit the travel industry hard. How has it affected you? Has the new year brought any positive developments?

A: A lot of my colleagues outside have lost their jobs unfortunately. In India, the government, PM Modi, and the Civil Avian Minister Mr. Hardeep Singh Puri have taken such brilliant initiatives to be able to carry the admissions, to be able to rescue Indians who are based internationally, and I think by medium of Air India we are the only ones who have started so many flights to newer destinations. India has done phenomenally well, and none of my colleagues here are affected.

Having said that, my heart goes out to all of those who’ve lost jobs in the travel industry during this pandemic. I’m very hopeful that the vaccination will bring back our normal. Things have gotten better. When Covid flights began, I was one of the first pilots to volunteer, because everyone was obviously scared. I remember on Mother’s Day, I flew from San Francisco to Mumbai, and it was a very satisfying moment. Covid has definitely changed our lives and has impacted all of us, but I’m very sure things will be back to normal soon.

Q: You’ve become an inspiration for many women. But who are the women that inspire Captain Zoya Agarwal the most?

A: Every single person in this world inspires me, you learn from everyone. But having said that, women empowerment is one goal which is extremely close to my heart and I’m greatly inspired by women who inspire our future generations and empower them. One such women is Toni Morrison. She is an inspiration, a legend, an activist, and a feminist writer. Her work will transcend the test of time, in terms of women empowerment.

I am also inspired by a lot of women who work for/with the United Nations, because they closely work towards women empowerment which is my next step and future goal. They are wonder women! And one of our women of steel is Lakshmi Puri (former Assistant Secretary-General at the United Nations and former Deputy Executive Director of UN Women), who has worked extensively towards SDG 5 (Sustainable Development Goal 5: Gender Equality).

I hope to someday work with such powerhouses!

Q: A message for the women who are inspired by what you’ve done?

A: For every woman out there, be positive and believe in yourself. We all have challenging personal and professional lives, but when you say it and believe that you can do it and it’s not a big deal, and that is a true gratification when you can do it on your own. Stay focused, and don’t lose sight of the bigger picture.