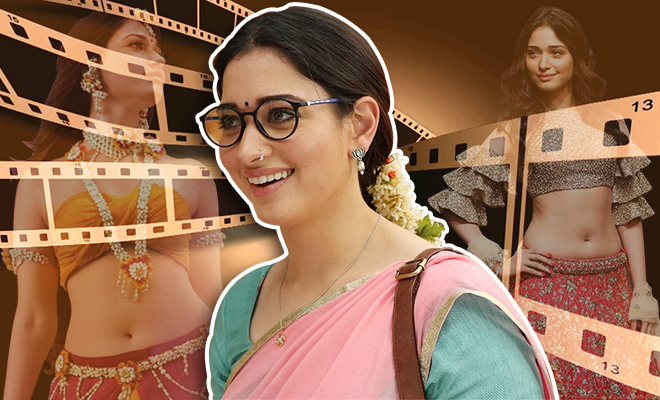 Tamannaah Bhatia’s Take On Beauty Standards In South Indian Cinema And Bollywood Has Got Us Thinking!

Bollywood and South Indian cinema have a deeply symbiotic relationship. Remakes, inspiration, both these industries feed off each other quite heavily. But one aspect that they perhaps don’t is when it comes to beauty standards. Popular South Indian actress Tamannaah Bhatia recently gave her views on the differences and we are on the fence about this one.

In a recent interview, Tamannaah was asked about her views on how the audience and industry itself prefers its women to look like. The actress did not hold back and gave a response that might stir up some debate.

According to Tamannaah, audiences and filmmakers prefer to see more traditional women on screen in South Indian films. We think she meant with the kind of roles that are written and put on screen for women in these films. They like to see women in ethnic clothes and prefer the desi look over a more westernised version.

As for Bollywood, Tamannaah feels that audiences and movie makers appreciate a more westernised look on women. She further elaborated that while she has a lot of fun doing Indian looks down South, the balance afforded by Bollywood is fascinating as well. You can be anyone in a Bollywood film and not just stick to the traditional beauty standards.

While we do agree that beauty standards are varied between these two industries, the concept of Bollywood appreciating western looks isn’t entirely true. Recently, Bollywood, including mainstream and indie, has made progress in their portrayal of women on screen, so has South Indian cinema. While there are still leaps and bounds to make in the way women are treated in our films, the difference in the beauty standards might soon become a thing of the past, IMO. We hope it is young and genre-bending actresses like Tamannaah who help bring about this change!

Do you agree with Tamannaah’s views on the different beauty standards in these two industries?

As for the sought after actress, Tamannaah is all set to star alongside Prabhu Deva in the horror comedy Devi 2. Check out the trailer here: