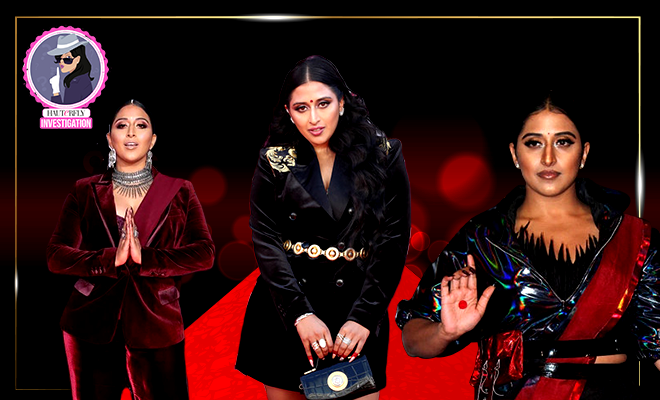 Ever wondered why Beyonce’s bodacious sheer dresses or Pharrell Williams’s big hats are usually the first things you associate with these pop idols? It’s because when you have a red carpet game as strong like these two, these looks become trademarks of your style. How you strut down the red carpet can have a lot of say on how one’ style evolves, some celebrities even using it to cement themselves as fashion icons. Why else would we have Deepika Padukone walk down every single runway of her career without even a single misstep…her brand thrives on it. We are excited to see what she’s wearing every single time, and it’s all new and refreshing.  A blend of which we have seen in another fearless woman  Indian-American songwriter and singer Svetha Yellapragada Rao, better knows as Raja Kumaro, professionally.

This Grammy-nominated star has slowly been coming up in the indie music scene in the country, given the boom is popularity of hip hop post the success of Gully Boy. She is also known for collaborating with artists like Gwen Stefani, Iggy Azalea, Fifth Harmony, etc. and being a guest judge on MTV Hustle, a show which has proven to be hugely influential on the Indian youth since its premiere. I was fortunate enough to catch her impromptu performance at the Lakme Fashion Week Winter/Festive 2019, rapping on the runway for Gundi Studios. While we do love her music, it is the looks she serves on the red carpet that has blown us over as well!

The most fashionable event, the American Music Awards in music went down last night and Raja Kumari was right in the middle of it representing us desis! She was a vision on a Tommy Hilfiger x Zendaya velvet pyjama suit, paired with a pallu and Silver Streak jewellery. We have been pairing statement silvers with deep reds forever, so seeing this look at the AMAs red carpet was a treat in itself. This classically trained dancer has always makes it a point to add some ethnic details in her ensemble, whether on an international carpet or back home. We think that is totally dope!

Priyanka Chopra Jonas might be the one who broke the internet with her bindi on the Met Gala 2019 red carpet, but it is Raja Kumari’s cool shringaar that has made its way into our top 10s lists from the year. Alta clad palms and pretty bindi are always part of her glam checklist, sometimes adding other Indian beauty staples as well. Her look from the iHeartRadio Awards combined the richness of a Versace Blazer dress with goddess-like glossy waves, and we stan the whole thing!

We wonder who is responsible for putting together Raja Kumari’s ensembles because there is so much that goes into them. Incorporating a leather jacket, belts, net tights and a bunch of other things with a saree seems like herculean task, one which pulled off effortlessly on the Vogue Women Of The Year red carpet. We want in on organising her closet for her!

Since we mentioned the AMAs, it wasn’t just Raja Kumari serving up major looks on the carpet, it was also one of the most fascinating red carpets we have seen all year. Check out some of our picks of the stand out looks from the night!

Lizzo With Her TINY Bag

All the Mega Sparkly Outfits