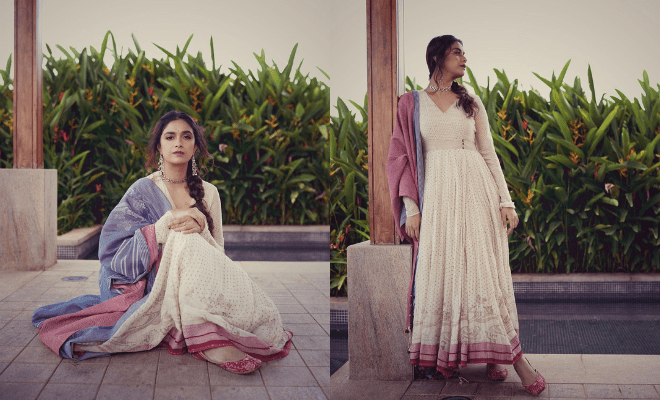 Keerthy Suresh Is The Epitome Of Elegance In This White Anarkali

While women are obviously allowed to (and should) wear whatever they feel comfortable and beautiful in, I love seeing them and myself in ethnic wear. There is some type of subtle elegance that shines through when a woman has donned Indian traditional wear. And as a lover of traditional wear, whenever I see an actress wearing a desi outfit, I am quick to take notes for my next outfit. Keerthy Suresh wearing this white and flowy anarkali for the promotions Vaashi has our whole heart and soul.

Keerthy Suresh is known for her love for ethnic outfits. The actress’s most recent photos in an Anarkali suit are a sight to behold. She looked like a divine beauty in a white and pink Anarkali suit. Keerthy Suresh took to Instagram to show off her stunning appearance in an ethnic ensemble by Swati Kapoor. She was seen dressed in a white anarkali intricately dotted in pink with a pink border. She completed her ensemble with a pastel blue and pink and white striped dupatta. She tied her hair into a long braid and accessorised her look with a choker and layered jhumkis, keeping her look simple yet stunning. The actress completed her ethnic look with pink juttis that matched her dress perfectly. Check out her head-turning look here:

Also Read: Keerthy Suresh In A Metallic Saree Shines Brighter Than A Star

On the work front, Keerthy Suresh will next be seen alongside star Nani in the action movie Dasara. The film will be directed by debut filmmaker, Srikanth Odela and produced by Sudhakar Cherukuri under the banner of Sri Lakshmi Venkateswara Cinemas. The film is said to have been made on a large scale. She is currently also filming Maamannan alongside Fahadh Faasil and Vadivel.

Sunita Kapoor Posts A Lovely Picture Of Daughters Sonam And Rhea Kapoor. We Love The Caption!