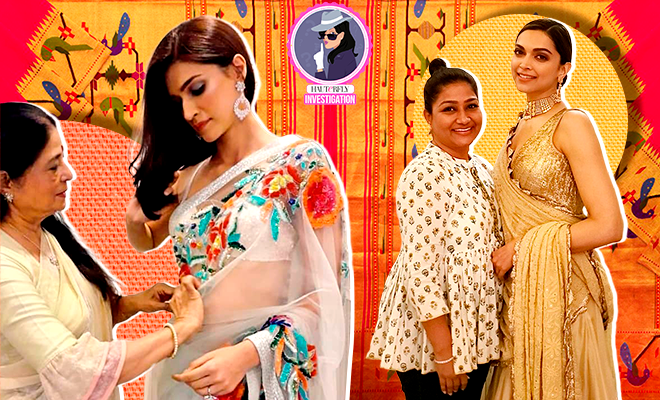 Hauterfly Investigates: The Women Behind The Fabulously Draped Sarees That Bollywood Stars Are Wearing

As a former fashion student who spent her weekends working backstage of fashion shows helping out with outfit changes, I know the importance of quick hands. I have been witness to undergrads draping a saree in minutes and it is a feat not easily achieved. When you are dressing a woman has to be out the door in less than 10 minutes, you can’t be making mistakes with pleats. The kind of reckless confidence you need to tie a saree perfectly when there’s a time crunch is earned through years of experience and practice. Something which Bollywood’s favourite saree draping artists Kalpana Shah and Dolly Jain have mastered.

These women are behind some of the most sought-after saree draping artists in the industry. In a recent feature from The Voice Of Fashion, we learned just how deep their influence lies when it comes to the fabulous looks we see on Bollywood’s finest.

The woman who started it all, 70-year old Kalpana Shah is a saree draping veteran in fashion. Based in Mumbai and with an impressive career spanning three decades, Shah is where it all began. After being spotted by Neeta Lulla for an impressive drape on a bride, Shah was hired to tie Aishwarya Rai Bachchan’s Gujarati saree for the wedding scene in the movie Hum Dil De Chuke Sanam (1999).

With an impressive clientele consisting of names like Madhuri Dixit Nene and Kriti Sanon, Kalpana Shah has been transforming the practice of draping a saree. For many of us, our first helping hands were form our mothers, aunts or big sisters. Which is is exactly the kind of personal relationships Shah maintains with her clients. She claims that while celebrities lend her fame, it is the work she does on real-life brides that grant her fulfilment. The kaaj that her fingers lend to bridal ensembles have sometimes been so irreplaceable that the hair and makeup had to be changed to match the saree. Now that’s what we call an auteur!

You can read more about Kalpana’s journey and how she came in possession of this legacy in her book The Whole 9 Yards. If you love fashion and Bollywood, this one’s going to be a page-turner!

ALSO READ: Kriti Sanon Says She Feels Sexiest In A Saree, And We Can’t Disagree At All!

For Dolly Jain, it all began with draping sarees for the ladies in her society as a means to kill time after the birth of her youngest daughter. Since she obviously had an unmatched talent for it, the now 43-year old decided to take it up as a career based off of a compliment from Sridevi. Dolly’s work was undaunted with the early criticism she faced for working as a saree draping artist and went on to be featured on some of the biggest stars of the country. Deepika Padukone’s entire wedding draping was seen over by her and we all know how beautiful that was!

Talking about her style, Jain confessed, “I try to incorporate the designer’s vision and the bride’s wish, but the bride is the priority. Each bride is different. Deepika likes her pallu long, open and resting on her arm, Priyanka likes a loose drape, while Isha likes her sarees and dupattas pinned and well-fitted for a neat look.”

She is also not shy about her prowess to have grown as a professional and becoming a force to reckon with in the industry, “My sari draping usually takes around 5-7 minutes. The rest is all about talking. I also hold a world record for draping a sari in 18.5 seconds.”. Now that’s impressive!

ALSO READ: Deepika Padukone Is A Sucker For Keeping Bridal Traditions And It’s Obvious With What She Wore For Her Anniversary

Much like Shah, Dolly also got her break when a major designer, in this case, the duo Abu Jani-Sandeep Khosla, spotted her work at a wedding. She recalls the designer commenting, “The sari seems to be like a handkerchief in your hand, folding itself in whichever way you want it to.”

Jain also believed while Bollywood gigs are great for exposure, the Indian wedding space is where she gets her bread from. “Weddings are the main source of business for us. Celebrity jobs and photoshoots do not pay as much; they give me visibility and photo-opportunity with stars, which helps my brand though.”

For Jain, saree draping is also more than just a career, she is passionate about it. “Saree draping is an Indian art which is getting lost. I want to convert the next generation who has never been taught how to wear a saree into regular saree wearing people. I tell them to bring whatever they have, and teach them how to rock a saree even with canvas shoes or their favourite Gucci belt”, she elaborated.