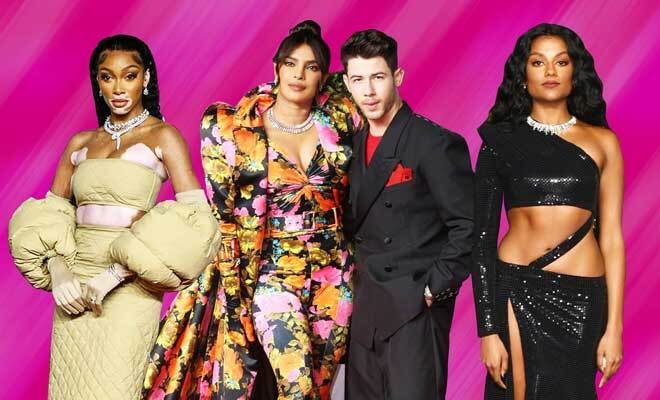 Fashion Awards 2021: From Priyanka Chopra To Demi Moore, Here’s A List of My Favourite Looks On The Red Carpet

Celebs are making a comeback to the red carpet post a series of virtual events where they were restricted to dressing up or not just for the living room couch. The British fashion fraternity and global celebrities like Priyanka Chopra, Nick Jonas, Dua Lipa, Winnie Harlow and more made a dazzling appearance at the Fashion Awards 2021 last night. The starry night was hosted by Billy Porter, who made a dramatic entrance at the event and advocated genderless fashion through his Richard Quinn ensemble. Slayer!

While the night was all things glitz and glam with awardees like Alessandro Michele, Dylan Jones, Stella Mc Cartney, Priya Ahluwaliya and Tommy Hilfiger amongst others, the award show took a moment to remember the untimely passing of designer Virgil Abloh. Honouring his contribution to the world of fashion, the late designer found a special mention amongst 15 awardees named as the leaders of change for their actions in the past year. Paying homage to the fashion luminary, designers like Kim Jones took the centre stage and dedicated their win to the late designer.

Furthermore, the event was like a runway for some great designs paving way for the hottest trends of the season. From florals, neons, fishtails to quilts, the evening was a witness to some amazing looks headlined by the celebrities themselves.

So, here are some of my favourite looks that walked the scintillating carpet last night.

Florals are here for the queen, making a striking entry to the season’s fashion hotlist. Dressed head-to-toe in designer Richard Quinn, the global star opted for a classic top knot and handpicked diamonds to complete her look for the Fashion Awards 2021. A vibrant colour palette blooming all over the massive cloth, the maximalist approach to slaying the print on print, is surely something only Priyanka Chopra can pull off. All hail the queen!

Making an uber-cool entry alongside wife and actor Priyanka Chopra in a typical black suit, was musician, Nick Jonas. Donning a double-breasted blazer with oversized pants, what added the quirk to the ensemble was his choice of the colour red peeking through the black in the form of a pocket square and a stunning pair of red Maison Margiela boots. Quite a smart choice to make, when your wife’s dressing for the entire village. Well done, Mr Jonas!!

The Canadian model too made a mark at the Fashion Awards 2021, and I’d say a rather great one, in a three-pieces quilted co-ord set, an unusual visitor to the red carpet. Staying true to her love for monochromes, she donned a padded bandeau with a long skirt and sleeve separates, teamed with nude peep-toes and stunning jewels by Bulgari. Winnie Harlow’s look was daring yet a delightful shift from the regular ballroom gowns.

ALSO READ: Priyanka Chopra’s Red Carpet Looks For BAFTA 2021 Were Bold And Experimental But So Unflattering

Musician Lily Allen in Fendi is definitely one of my favourites from the starry affair that were the 2021 Fashion Awards. Bringing a shimmer pantsuit to life, the singer got back at the ‘body shammers’ who questioned her ‘skinny physique’ a few months back, through her choice of ensemble. Slaying Fendi’s backless blazer top teamed with oversized flare pants, Lily Allen added her personal twist to the disco-ready crisp formals.

Opting for a pale gold Gucci brocade blazer, layered over a peach shirt, teamed with black trousers and topped up with a western black tie. The Normal People actor dressed well in the semi-Spanish styled separates. Also full marks for the colour.

Making an elegant entry at London’s Royal Albert Hall, for the year’s Fashion Awards. Demi Moore chose to play safe and dressed in an off-shoulder sparkling ombre Fendi gown. In sync with the dazzling attire were the subtle makeup and a pair of black leather hand gloves (a common sight on this year’s red carpet). Turning heads, with her fashion game and startling statements, Demi Moore was a vision in black sharing frame with a friend, fashion designer Kim Jones.

Tell us your favourite look that walked the red carpet in the comments below!