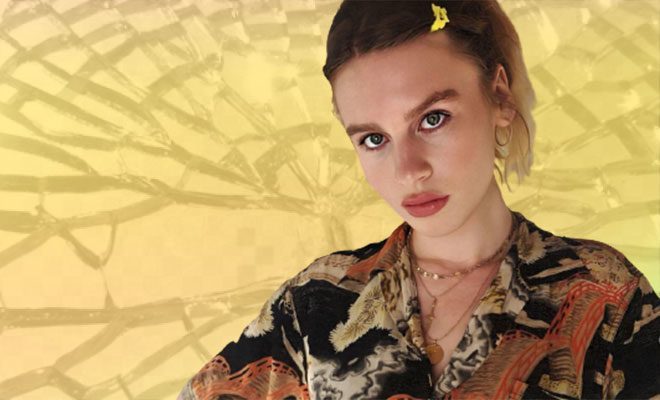 In recent years, we’ve seen a lot of celebs getting married and starting their happily ever after. While some celebs’ wedding arrangements, colour schemes, etc. stuck to me, there were other celebs that I remember for the dresses that they got married in. I mean, we all remember Priyanka Chopra Jonas’ really long veil from her wedding to Nick Jonas, don’t we? And just when I thought that it can’t get more creative than that, I was proven wrong. Ivy Getty, great-granddaughter of American billionaire oil tycoon J. Paul Getty, proved me wrong when she wore a gown made with broken mirrors for her wedding, recently.

Model and artist Ivy Getty married her partner Tobias Engel, a photographer on Thursday, wearing a four-layer dress made of broken mirrors. The dress was designed by the famous British designer John Galliano for Maison Margiela.

Ivy Getty who is a great-granddaughter of oil tycoon J. Paul Getty shared a picture of herself in the gown made with broken mirrors and thanked Galliano and Maison Margiela. In her Instagram post, she wrote, “A little over a year, 18 dresses, many laughs, teas and hugs later. Thank you @jgalliano and @maisonmargiela for making the two most beautiful wedding gowns I have ever laid eyes on. Working with you John has been such a pleasure. You, @lexyroche , and @ilardoraf_ are family to me and I am so grateful to have been able to see the love and true artistic value and thought you put into making all my gowns and bridal party gowns. John, I truly love you my Sagittarius fairy godfather Thank you for collaborating with @louboutinworld to make two beautiful sets of heels to complete this look that has tattooed my life forever. Thank you @voguemagazine for capturing @jgalliano and I’s relationship so beautifully.”

Also Read: From Vicky-Katrina To Alia-Ranbir, Check Out The Couples Rumoured To Tie The Knot This Wedding Season!

According to reports, John Galliano spoke about the gown adorned by Ivy Getty, stating that the gown was four-layered – the first layer was a full corset that matched Ivy’s skin colour, the next two layers consisted of tulle dresses, and the final layer was made of fragmented mirrors. He further explained, “A big percentage of the dress is a real mirror, but because she has to walk in it, we created a substance that would evoke a real mirror but weigh considerably less… the fragments are linked together with wire, like jewelry.”

Also Read: Someone Made A Wedding Dress Made Of 1500 Discarded Masks…And It’s Beautiful

Having seen that gown on her Instagram post, I have to say that it is one of the most artistic bridal gowns that I have seen. And seeing how Ivy Getty added bits and pieces of people in her life makes the gown with broken mirrors even more personal and beautiful.

This Woman Turned Up In A Wedding Gown At Her Fiance’s Work Along With A Priest. Things Only Escalated From There…