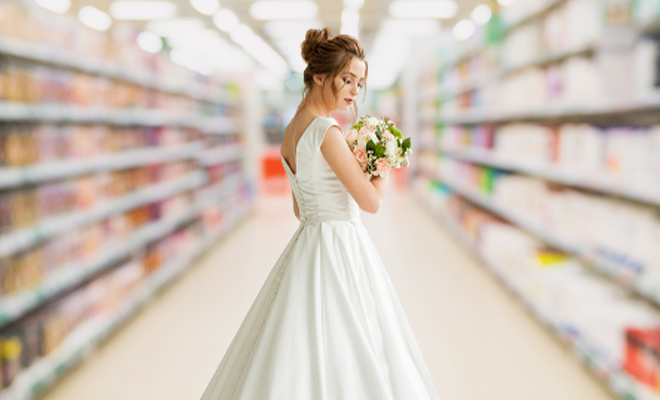 This Woman Turned Up In A Wedding Gown At Her Fiance’s Work Along With A Priest. Things Only Escalated From There…

So sometimes, it can get frustrating when men just don’t do relationship things the right away. It seems like a woman took her annoyance a bit too far. This woman turned up in a wedding gown at her fiance’s work with a priest and bridesmaid. This was at Las Vegas Target and her fiancé is an employee there. A Tik Tok user @boymom_ashley posted a two-part video which follows the rather incomplete story of a determined bride.

This woman could be seen navigating through the aisles looking for her fiancé, dressed in a white wedding gown. How often do you get to see that? Forgive me but for people not part of the main plot in this story (and we are thankful for that) it is really amusing. I do know it must have been terrible for them though.

In the second half of the video, the woman had located her unsuspecting fiancé who was restocking a shelf. She told him, “You put this ring on my finger two years ago and it’s time to do it or get out.” She gave him an ultimatum to marry her right then and there or just leave her alone.

I mean, I would be frustrated too…two years of engagement and no plans of a wedding? Could he have done something to make her go crazy? It’s possible. When the woman found people staring and watching the show, she greeted them and said she is making her fiancé “commit”.

At that point the fiancé asked her if they can have a word outside. And while walking past the camera, it seems like he asked, “Could someone had told me then?”

Unfortunately, we don’t know what happened next. I am invested and I need to know. But taking a wild guess, I don’t think he would have married her then and there. It’s a bit too much.

Well, it seems like the woman could have had an emotional breakdown. Maybe she was beyond her breaking point and had no shred of patience left in her veins. I know she sounds crazy but could he have done something to bring about that reaction? Maybe. Or maybe not. Either way, we don’t know the story. Babe, really, you cannot make someone do anything, especially in the matters of the heart. What if even the point of the commitment that comes out of force? You can’t be forcing love out of someone.

ALSO READ:Should You Ask Him What He Is Looking For Early On During The Dating Period? Yes!

If you ask me on any given day, except when back in 2008 when my first boyfriend proposed me – I will say that most men can be pretty dumb emotionally. I know, it sounds very stereotypical but that’s really a common trait among the martians. Sometimes, you look at a guy and wonder why he can’t see that he is basing his relationships on really silly things. Sure, back in 1997 someone broke your heart. Yes, you fell for two women who were toxic but have you ever wondered how many disappointments have we faced from men? From dating? And yet, here we are – still not letting the damage get to us.

But really, the next time I find a commitment phobic guy, I will go and pull this off just for kicks. You know to like really freak him out and then have a satanic laugh at the end of it all. Come on, a girl can enjoy some savage thoughts! It’s not like I will do it for real.

ALSO READ:A Groom Dissed 2020 In His Wedding Vows And Mother Nature Responded With A Bolt Of Lightning