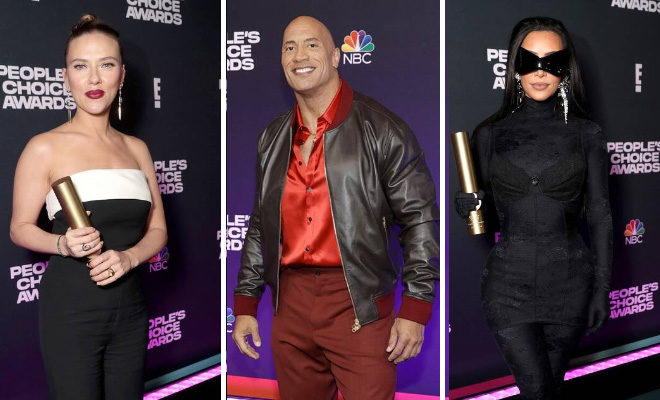 Wrapping the year, celebrities walked the scintillating carpet at the People’s Choice Awards 2021. Hosted by Saturday Night Live fame Kenan Thompson, the People’s Choice Awards honour the year’s top productions across entertainment and pop culture. From Dwayne Johnson, Kim Kardashian West to Halle Berry, the awardees arrived in style accompanied by a list of attendees including Cardi B, Mindy Kaling, Paris Jackson, Charli D’Amelio, Lili Reinhart and more. A starry night that witnessed some of the best dressed in the business, and I loved the fashion that made a quick yet remarkable appearance. Let’s take a look at the winners of the night and some of the best dressed at the PCA!

Bringing back her Batman avatar to the big stage, Kim accepted the title of ‘2021 Fashion Icon Award’ (kaafi deserving after a year filled with some major fashun moments) wearing an all-black look by Balenciaga (déjà vu, right?). While the head-to-toe sexy black attire was not enough, the beauty mogul accessorised it with a pair of black sunglasses and chunky silver earrings.

The Rock too made a rather ‘silky’ appearance in a button-down red satin shirt paired with burgundy trousers and leather jacket to seal the look (and I am like, “Hey, Govinda, is that you?). Sporting Dolce & Gabbana, the actor accepted two consecutive titles of ‘People’s Champion Award’ and ‘Male Movie Star of the Year’ as presented by his dear drinking buddy (that’s what he said) and entrepreneur, Jeff Bezos.

Recipient of the ‘2021 People’s Icon Award’ the Bruised director and actress came dressed up in a sequin catsuit sitting well on the ‘Catwoman’ actress. The one-piece also boasted a denim trim at all of its seams and was accessorised with a pair of holographic heels and silver danglers (isn’t she shinning already?).

Making an appearance in a classic black and white jumpsuit (this is a sign, that jumpsuits are making a comeback), The Black Widow star and executive producer took home the title of ‘Best Female Movie Star of 2021.’

Debuting festive hair at the 2021 awards nights, Erika Jayne, opted for a black sequinned mini dress with a rare and edgy hair accessory sitting on her top-knot (which definitely was the show stopper of the evening). The Real Housewives Of Beverly Hills star attended the ceremony to cheer for her show which was one amongst the nominees for ‘The Reality Show Of The Year.’

ALSO READ: The Most Fashion-Forward Trends Birthday Girl Kim Kardashian Single-handedly Popularised (And Some Controversial Ones We Wish She Hadn’t)

Making the case for black and white, the Riverdale actor looked crisp and edgy in the Valentino ensemble. A three-time nominee at the PCAs, she arrived as a presenter this year, rocking a baggy suit as a minidress. “A gentleman for the evening,” is how she described her look for the big night and we too agree!

Blooming and how! Addison Rae brought a beautiful bouquet to the red carpet by dressing up like one and I am loving the big floral energy. Nominated at the awards show for ‘The Social Star of 2021,’ alongside Charlie D’Amelio, Justin Bieber, Kylie Jenner and more, the Tik-Tok star turned actress walked the carpet in a vintage dress by Betsey Johnson and a beautiful multi-layer beaded maroon choker to match the flowers (something that Disney will love).

All geared up for her big performance at the award show, H.E.R, was a vision in pink, all dressed up in Carolina Herrera pantsuit. Making a quick and easy choice with her silhouette, the American musician performed a musical tribute to the life and legacy of Motown legend Marvin Gaye.

Resembling Erika Jayne’s look for the big night, the Outer Banks star made a gorgeous appearance on the red carpet in a sparkling Versace asymmetrical two-piece. One amongst my most favourite looks, the top knot and diamond safety pin (which mind you held the entire dress together) was all things sheen and ofc perfect (*applause*).

A glittery affair! Mindy Kaling dressed in a Pamella Roland dress with a front slit caught our eyes. The Office star sealed the look with a pair of black pointed-toe heels and I quite loved it.

One amongst the most stylish global personalities, who is often known for sporting many awesome and some ailing fashion, added to the list of presenters at the awards night. Wearing a pink sequinned bustier-style gown designed by Irena Soprano, the WAP queen thankfully didn’t dress the OTT way and was quite a stunner in diamond jewels and black long curls (and woman that’s a good fit).

All and all the fan-voted event, spanning 40 categories was a wonderful night for winners like BTS, musician Aguilera, Lil Nas X, Adele, film Black Widow, Cruella, Squid Game as they won some significant titles amongst others.