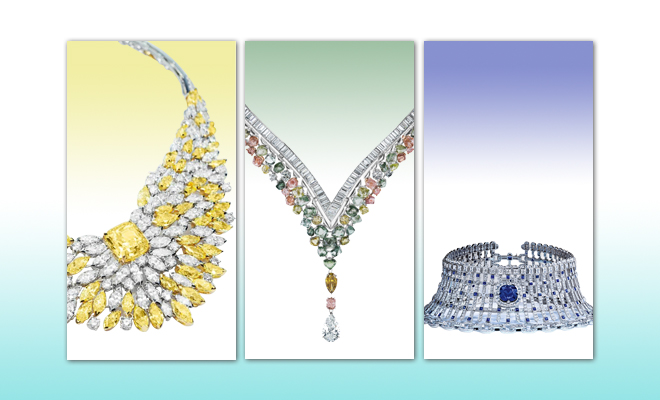 All The Best Haute Jewellery From This Fashion Season

Fashion’s biggest icon once said that diamonds are a girl’s best friend. While some might scoff at that statement in today’s time and age, our hearts can’t help but flutter at the sight of all that glitters. With the Haute Couture Week finally coming to an end, it’s not just the clothes and shoes that have caught our eye but also the show-stopping jewellery that dazzled the runways of Paris. With major players in the jewellery industry descending down on the city of love, here are all the stunning jewellery pieces that caught our attention.

Gucci tops our list, as this was the first time that the Italian fashion house ventured into high jewellery. Designed by its current creative director, Alessandro Michele, the collection which contains 200 pieces of jewellery has been named ‘Hortus Deliciarum’. Translated from Latin it stands for the ‘Garden of Delights’. The exclusive range highlight Gucci’s symbols like the legendary lion’s head and hearts and arrows. Cast in precious metals and colourful sparkling gemstones like tourmaline, amethysts, sapphires and of course, diamonds, we want our share of the collection ASAP.

This time Chanel took inspiration from its founder Coco Chanel’s love for Russian culture. Aptly titled, Le Paris Russe De Chanel or Russian Splendour, the jewellery was heavily influenced by the ornate fashion of the 1920s. With an influx of Russian aristocrats in Paris during the 20s, what makes the Russian connect even more special is the fact that the man responsible for introducing Russian motifs to Chanel’s jewellery is none other than Coco’s former flame, Grand Duke Dimitri Pavlovich. The jewellery is very Great Gatsby-esque and we can bet it will make you want to take a break from the minimalistic trends of 2019 and relive the roaring 20s.

Louis Vuitton decided to pay homage to the medieval heroines with their Riders Of The Night collection. With dazzling sapphires, aquamarines and diamonds make up the collection, the pieces are designed to look like crests and armours that make their wearers feel like powerful warriors. We wouldn’t mind wearing that necklace if it means we can get out of bed on a Monday feeling like fighters.

For their 145th anniversary, Piaget turned its attention towards the arid deserts and canyons with the debut of their Golden Oasis collection. The pièce de résistance of the range is the necklace which has been aptly titled the Golden Hour. Crafted by hand, the necklace is set in 6.63-carat yellow diamond and took a whopping 450 hours to make.

The name De Beers is all too familiar to every other woman, owing to their stunning collections. And their launch for 2019 marks the biggest one so far. Drawing inspiration from the colours and textures of the creatures of the wild, the collection has been named Portraits of Nature. The most striking piece in the range is the Knysna Chameleon necklace. Much like its name, the necklace is a shape-shifter because it can be worn in four different ways, guess why? Well, its diamonds are detachable. And if that wasn’t enough, the necklace is set with both polished and unpolished diamonds. Talk about unearthing a diamond in the rough.

Although Maria Grazia Chiuri may be the mastermind behind the exquisite clothing seen at the Dior fashion house, the Haute jewellery department is all Victoire de Castellane’s, who has been with Dior for the past two decades. And to celebrate her completing two decades at Christian Dior, Castellane displayed jewels from the Gem Dior collection in the most romantic setting at the Palazzo Labia in Venice. The range which boasts of 99 pieces of jewellery includes rings, earrings and necklaces, and is crafted with some of the finest rubies, diamonds and emeralds among others.

One of the oldest jewellery houses, Boucheron is also the first to have set up shop at Place Vendome, the motherland of all Haute jewellery stores. Their store at 26 Place Vendome has been there since 1893, and legend has it that Frederic Boucheron, the founder of the brand, chose the place himself because the positioning of the store ensured that his diamonds shone all day long. The new collection has been designed as a tribute to the now-iconic address and consists of sautoir necklaces that can be worn in multiple ways.