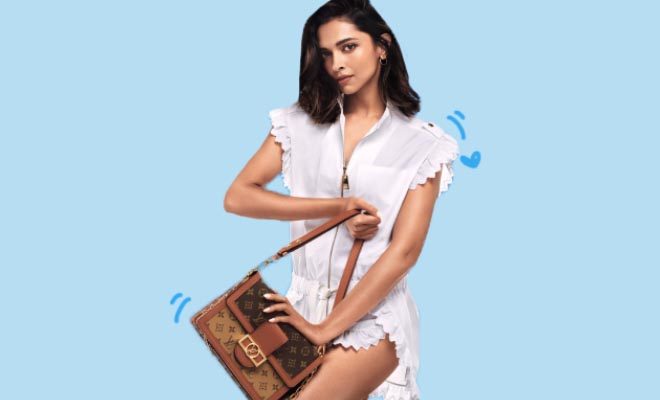 Ahead Of Cannes 2022, Louis Vuitton Announces Deepika Padukone As Its House Ambassador. Now We Know Who’s Dressing Her For Red Carpet

Well, Deepika Padukone joining hands with French luxury fashion house–Louis Vuitton is no more a secret. After weeks of speculation, and truckloads of hints given by Deepika’s recent obsession with the label, Louis Vuitton has finally announced the Gehraiyaan star as its ‘House Ambassador.’ Yep, that’s right! Featuring in the label’s latest Dauphine bag campaign, Deepika takes a seat as the house ambassador alongside names like Emma Stone and Zhou Dongyu.

While we’re at it, let us tell you that a ‘House Ambassador’ is a personality who represents a brand in their country. Deepika proudly is the first Indian celebrity to be signed as LV’s ‘House Ambassador.’ That’s so good! As seen in the campaign pictures, Deepika is dressed in a white zipper dress, holding LV’s iconic monogram, Dauphine bag. And announcing the news, LV described Deepika Padukone in a statement “touted as one of Indian cinema’s most loved and successful actresses to date, and her achievements have made her an icon of recent times.” The association as expressed by the French fashion house is a fresh chapter for both Deepika and the brand after previous collaborations over the Nicolas Ghesquière’s novel-inspired pre-fall 2020 campaign. Excited fans, seemed thrilled to know about Deepika’s latest feather added to her hat and congratulated the Gehraiyaan star for the same.

Talking about the Bajirao Mastani actress’ accolades apart from her collaboration with LV, she will soon be seen walking the red carpet at this year’s Cannes Film Festival. Also named as a member of the jury of this year’s 75th Cannes Film Festival, Deepika has already taken her flight to Cannes for some early jury duties. We’re so proud of you, DP and can’t wait to watch your magic on the red carpet.