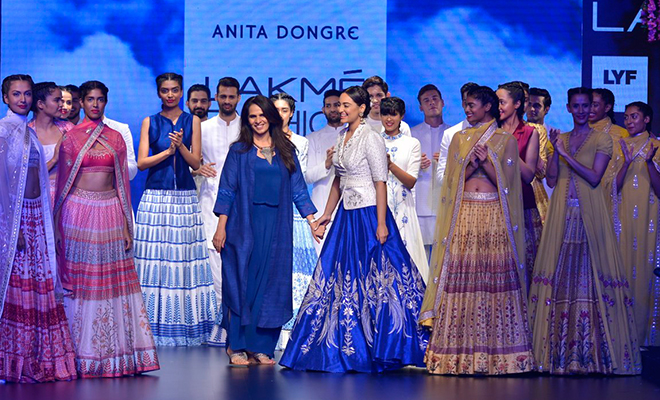 Talk to any modern Indian bride, and you’ll know that while traditional heirloom ensembles are her dream, functionality and modernity take precedence when she’s opting for her wedding attire. And that’s the sensibility Anita Dongre tapped into when working on her Lakme Fashion Week Summer Resort 2016 collection.

Aptly titled Love Notes, we witnessed a hint of romanticism in summer, with bougainvillea stems displayed high up and across the ramp’s length. The idea behind her collection was the emotion of a young woman who is still exploring the changes her lover will bring to her life. The clothes, though opulent by the look of it, were light, breezy and wearable. Hues featured in the collection changed from whites to hot pinks, and sage green to candy yellow as models walked the ramp wearing long jackets with tailored pants, lehengas and even flowy palazzos with long kurtas as well as saris. The designer worked with what’s synonymous to most of her collections — gota patti and resham embroidery.

Dongre’s muse for the day was Sonakshi Sinha who twirled her way across the ramp as a brigade of models followed her. She was seen dancing to the tunes that one is most likely to hear at an Indian wedding. Sonakshi played the part to the hilt, if the part was to emulate a young bride who is just happy soaking in all the attention on her D-day. In fact, her infectious energy spread to the ones seated on every row witnessing that show, and she even asked straight-faced models to smile, which eventually most of them obliged to. It was all fun and frolic, but in clothes that were effortlessly graceful. The designer abandoned sartorial structures that were heavy and made it a point to recreate clothes that were far from conventional. In fact, the display looked like every urban bride’s dream wedding ensemble.