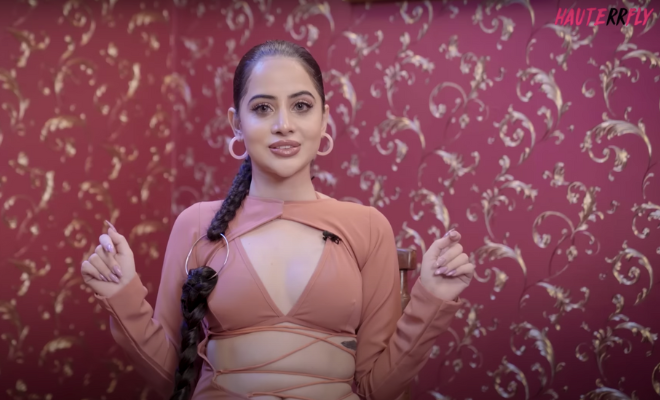 Uorfi Javed is always making headlines for some reason or the other. Be it for making a fashion statement or slamming trolls, Uorfi Javed is always in the news. But jo bhi ho, we love talking about her. If someone were to ask me, I’d say the actress wouldn’t just make a great reality show contestant but also a badass reality show host. I know what you’re thinking, what makes her so good? Well, what doesn’t! She knows how to take a stand and speak up and she has us all listening, isn’t that what really matters? To have all of our attention and hold it while she says what she has to say. But there’s a lot more to Uorfi that could make her a sought-after reality show host!

Now, most would say that she’s “muhphat” well, so be it. What’s wrong with that? Uorfi Javed is a very no-nonsense person and is known for speaking her mind. She doesn’t hold back when she talks and that makes her one of those people who do not shy away from showing others the mirror or speaking the cold hard truth no matter what! And what else do we need in a reality show host?

2. Others’ Opinions Don’t Bog Her Down

Uorfi Javed does not need validation from people which makes a HUGE inspiration for all of us. She doesn’t let someone else’s opinion about her hold her back or stop her from doing what she wants. No matter who thinks what, Uorfi does Uorfi and you gotta do you!

3. She Doesn’t Compete With Other Women

Also Read: Uorfi Javed Says She Has “Lost Faith In The System” After Man Who Threatened To “Cyber Rape” Her Gets Bail

Uorfi Javed is not one to let things slide. She does not let trolls or people get away with threatening her. She is quick to file a complaint against them and demand justice and we’ve seen this time and again. Not only does it inspire us all to demand justice and be strong and bold but she also gives us hope.

5. She Stands By Womenkind

Uorfi Javed is known to be an opinionated woman with a no-nonsense attitude. Not only does she stand up for her own rights and cheer other women on but she also fights for women. We have time and again heard her talking slamming trolls and calling out the authorities for the crimes against women.

Her unfiltered words are quotable AF! We’ve heard Uorfi Javed speak about hush-hush things out aloud. She’s not one to shy away from things and she sure as hell knows how to add spice and drama to a conversation. And isn’t a masaledaar tadka just what we want from a reality show?

Well, guess what? Uorfi Javed is all set to team up with Hauterrfly for a fun and unfiltered talk show. Do you wanna talk to Uorfi with us? Feel free to sign up for the show by clicking here and filling out the form!