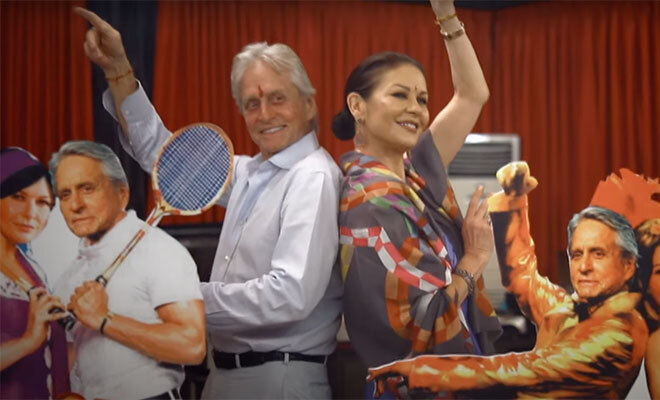 So, I was born in Mumbai and I’ll admit that it is a beautiful city but it can be chaotic at times or maybe all the time, to be honest. But I always wonder how other people view Mumbai, is it any different than mine? And look like my questions will be answered soon. Yes, I am talking about Shailendra Singh’s upcoming project Unplugged in Mumbai starring Michael Douglas and Catherine Zeta-Jones. We just got the teaser of the feature series and the couple is exploring the Indian culture to the fullest, we are here for it!

On Friday, National-Award-winning director Shailendra Singh released the trailer of the second part of his feature series Unplugged Cinema. The title of his new project is Unplugged in Mumbai, which features Hollywood star couple Michael Douglas and Catherine Zeta-Jones. In the trailer, the couple is talking about the Indian culture as they are exploring Mumbai together. Michael also mentioned that he came to India several years ago to scout for a movie and how he was thinking about doing a sequel to Romancing The Stone. But the main highlight of the trailer is when Michael and Catherine recreated Shah Rukh Khan and Deepika Padukone’s iconic pose from their film Om Shanti Om. Catherine also revealed that she’s a big Bollywood fan.

Take a look at the trailer here:

Unplugged in Mumbai is written by Nicole Sottung and Arun Kumar Aravind is the editor of the feature series. The director previously released a feature series on the world-renowned ballet dancer Sergei Polunin titled Sergei: Unplugged Cinema.

Michael Douglas and Catherine Zeta-Jones starrer Unplugged in Mumbai is going to release on July 15 on Shailendra’s Youtube channel.

‘IN THE SOOP: Friendcation’ Teaser: BTS’ V Is Having The Time Of His Life With His Wooga Squad Hyungs!