Sonam Kapoor Got A Special Art Piece Made To Announce The Birth Of Their Son, Here’s What It Means 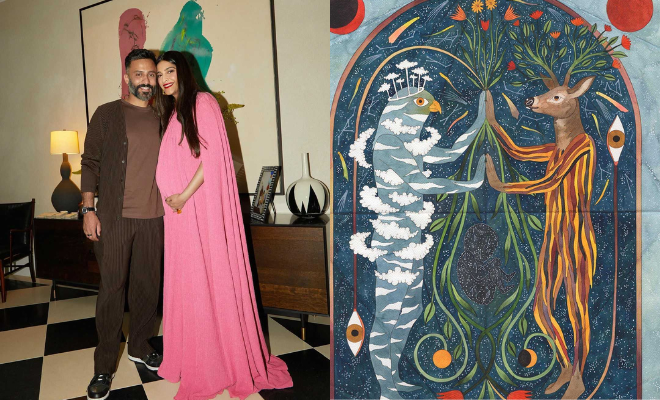 If you ask me, I will say that out of all the celebrities that have made pregnancy announcements in recent times, Sonam Kapoor and Anand Ahuja’s announcement was my favourite. Not just because it was aesthetic but also because I found it to be more simple yet intimate than the others. And so, I expected it to be something even more meaningful when she would announce the birth of her child. And on August 20, 2022, the actress gave birth to a baby boy. She announced that news with a simple message. But what stole the show for me was the art that was created below it. And I’m sure that I was not the only one who wondered what it was. Well, Sonam Kapoor answered our thoughts with her latest post.

On August 28, Sonam Kapoor Ahuja took to her social media to reveal the reason behind the special customised art piece that was created to announce the birth of her and Anand Ahuja’s first child, a baby boy. The art piece created by Rithika Merchant has a more universal meaning behind it.

Also Read: B Praak And Wife Meera Bachan Announce Second Pregnancy With A Romantic Post. Many Congratulations To Both!

Also Read: Sonam Kapoor Flaunts Her Baby Bump On Her Instagram Story. A Picture Too Sweet To Be Missed!

Sonam Kapoor further writes, “Eagles or hawks are associated with fatherhood and otherworldly creation (the overarching concept of the Dyeus Pita/Sky Father). Deer are associated with motherhood. They are gentle, attentive, and watchful creatures. They are always on guard and can move, adapt, and survive even in the most challenging conditions.” Talking about its history, she wrote, “Ever since the early Neolithic, when the earth was much colder and reindeer more widespread, the female reindeer was venerated by northern people. She was the “life-giving mother”, the leader of the herds upon which they depended for survival, and they followed the reindeer migrations for milk, clothing, and shelter. She was a revered spiritual figure associated with fertility, motherhood, regeneration, and the rebirth of the sun.”

Many times, we have seen Sonam Kapoor Ahuja’s intellectual side come up during interviews and that is a result of her voracious reading but to come up with such a concept that holds such a deep meaning is something else entirely.