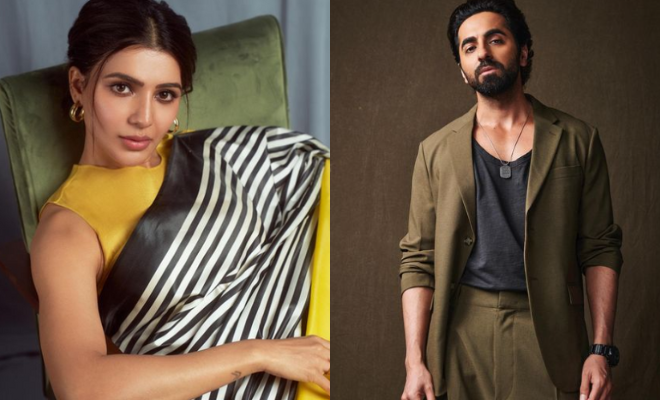 We are seeing quite many celebrities across different film industries making their debuts in other language films. Through this, we are getting to know actors belonging to many regional language industries and hidden talents are getting explored. South-Indian actress Samantha Ruth Prabhu who has impressed the audiences down south is now gearing up for to make her big Bollywood debut as well! Samantha became a national sensation with the song ‘Oo Antava’ song from the movie Pushpa and is now set to grace Bollywood’s silver screen.

As per a report by Peeping Moon, Samantha will make her Bollywood debut in a film starring Ayushmann Khurrana. The film is produced by Dinesh Vijan and currently, the paperwork for the film is being completed and the dates and the filming schedules are being finalised.

There are also reports of the details of the film being kept under wraps as of now and further details will be revealed later. It is also said that the makers will begin shooting the film by the end of this year and is said to be a mixture of humour and suspense. Its release date is also said to be in 2023.

Reportedly, this is not the only Bollywood project Samantha Ruth Prabhu has signed. The second film that she has taken up is b a mythological epic saga which will go on floors in 2023. Also, it appears Samantha appears to be on a roll as there are also rumours of her signing up for another film starring Akshay Kumar as well.’

Samantha Ruth Prabhu and Ayushmann Khurrana are a fresh pairing and we are excited to see them together!

Sanya Malhotra Is Like A Barbie Girl In The Barbie World. We Think It’s Fantastic!