New ‘Brahmāstra’ Poster Gives A Glimpse Of ‘Kesariya’ Song, A Look At Ranbir And Alia’s Shiva And Isha 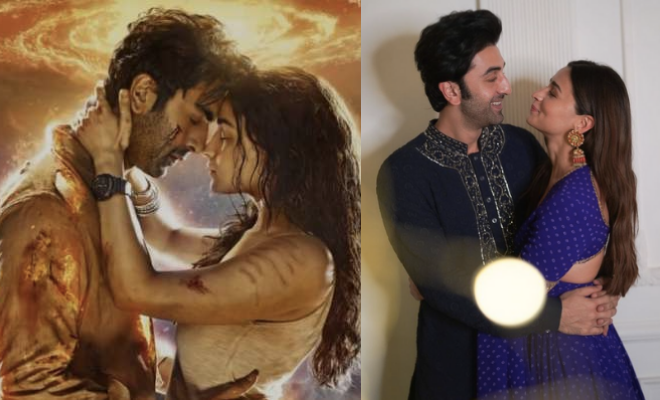 The one celeb couple that has been in the headlines the last few days is Alia Bhatt and Ranbir Kapoor. The lovebirds have us all on the edge with the wedding rumours and TBH, we just cannot wait to see them tie the knot. And if that wasn’t enough, the duo has left us all wanting more with the latest poster of their upcoming film Brahmāstra. Taking to Instagram, director Ayan Mukerji unveiled the latest love poster of the film featuring Alia Bhatt and Ranbir Kapoor with a snippet of the latest music of the film which seems to have been titled ‘Kesariya’

In the poster shared by the director of the upcoming film, Alia Bhatt and Ranbir Kapoor can be seen sharing an intimate moment. “Love is the Light. Part One: Shiva… is what this first chapter of Brahmāstra is now called. But for the longest time, it used to be. Part One: Love. Because at its core, Brahmāstra is about the Energy of Love. A Love – that spread like Fire, beyond the Movie, and into Life. So here it is, our Love Poster! The Time feels Right for it…There is some extra love in the air these days ! :),” read the caption. Well, we agree Ayan, love does seem to be in the air for this couple, now more than ever.

Check out this poster of Brahmāstra with what we think might be the love anthem of the year!

For the unversed, the first part of the upcoming superhero trilogy Brahmāstra directed by Ayan Mukerji and produced by Karan Johar is slated for release in September 2022. The film stars Ranbir Kapoor and Alia Bhatt in lead roles. Amitabh Bachchan, Mouni Roy and Nagarjuna Akkineni will also be seen playing key roles in the film. This poster release comes just ahead of the couple’s rumoured wedding which is set to take place between April 14 and 17.

While there has been no official confirmation about the wedding from the couple, Alia’s uncle Robin Bhatt told India Today that the wedding will take place on April 14. The actress’ brother Rahul Bhatt also confirmed that the couple is all set to tie the knot in a 4-day long affair, which will be an intimate ceremony, during an interaction with ETimes.

Well, Alia Bhatt and Ranbir Kapoor sure know how to tease us with this poster and music just days before their big day.