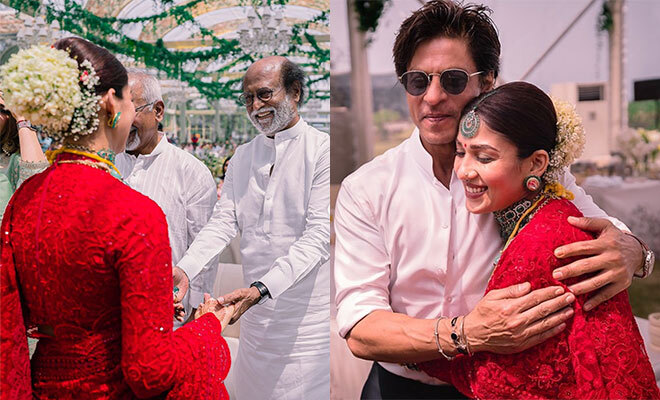 This year, we were lucky to witness some of the most beautiful and magnificent celebrity weddings and Nayanthara and Vignesh Shivan’s royal wedding was one of them. The couple tied the knot on June 9 in the presence of their family members and close industry friends. However, today they reminded us that picture abhi baaki hai mere dost as Vignesh shared some unseen pictures from their special day featuring Bollywood’s King aka Shah Rukh Khan and Superstar Rajinikanth. The pictures are so mesmerising!

On Saturday, Vignesh Shivan surprised us by dropping some unseen pictures from his wedding with Nayanthara to celebrate their one-month anniversary. In the pictures, the newlywed couple can be seen with two superstars of the Indian cinema – Rajinikanth and Shah Rukh Khan. Sharing the pictures with SRK, he wrote, “What more can anyone ask for ! #kingkhan @iamsrk ! Blessed to have this humble , kind , charming and wonderful human being with us during our wedding ! The Badshaah and the time wit him ! Bliss ! Blessed (emoji) One month anniversary (emojis).” This is so cute and SRK is looking so handsome!

Also Read: Nayanthara And Vignesh Shivan’s Honeymoon Pics Show What Once In A Lifetime Love Looks Like And We’re Here For It

Nayanthara and Vignesh Shivan can be seen taking the blessings of Rajinikanth after they tied the knot. “With the loving #Thalaivar Rajnikanth sir 🙂 blessing our wedding with his esteemed presence with sooo much of positivity and good will (emojis) Happy to share some great moments on the one month anniversary of our special day (emojis),” the caption read.

Also Read: Ranveer Singh, Katrina Kaif, And More Congratulate Nayanthara And Vignesh Shivan On Their Wedding. Fans Are The Happiest!

Congratulations to Nayanthara and Vignesh Shivan on their one-month marriage anniversary. We hope they will keep dropping more unseen pictures from their fairytale wedding!