We are always so keen to know about the love life of our favourite celebrities, right? Even if it is just a rumour, we still want some kind of happy development in the story. A very talked-about love story from the B-Town currently is that of Kriti Sanon and Prabhas. In fact, the rumours go as far as they getting married super soon. But, looks like that was too a rumour only, actress Kriti Sanon has put out a clarification and called everything fake news.

On November 29, Tuesday, Kriti Sanon took to her social media handle to share a note that addressed the current rumours about her and Prabhas. Recently, on a reality show when her Bhediya co-actor, Varun Dhawan, hinted at Kriti’s secret love life, the latter really considered bringing an end to all the rumours. She wrote that the stories are neither “Pyar” nor “PR”, a creative and wise use of words because there are only two possibilities. Kriti’s note further called this rumour a “Howl-various” one and said that it gained a lot of attention because of a “fun banter” by her co-star, Varun Dhawan. The Bhediya actress also confirmed that before she gets to hear her wedding date from some media house, it’s better to clarify that these rumours are “Baseless”. She also put a “Fake news” sticker on the post. 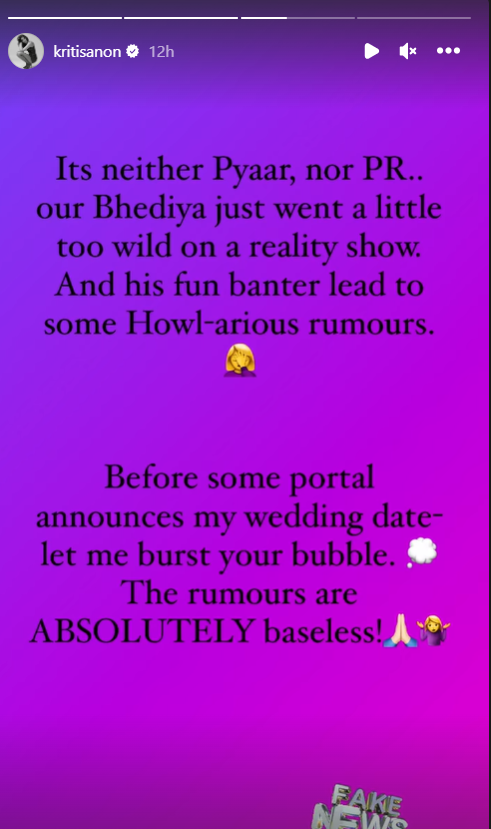 Also Read: Kriti Sanon Reveals She Rejected Films That Didn’t Pay Her Enough. We’re Glad Actresses These Days Know And Demand Their Worth!

So, well now we know there is nothing happening between Kriti and Prabhas. However, we will definitely get to see the charm of this duo in their upcoming film Adipurush, the trailer of which released a few days back. The movie is all set to come on January 12, 2023.

Kriti Sanon Reveals She Rejected Films That Didn’t Pay Her Enough. We’re Glad Actresses These Days Know And Demand Their Worth!