Kangana Ranaut Explains Why South Content And Superstars Are Such A ‘Rage’ After Success Of ‘Pushpa’, ‘KFG’. She’s Got A Point! 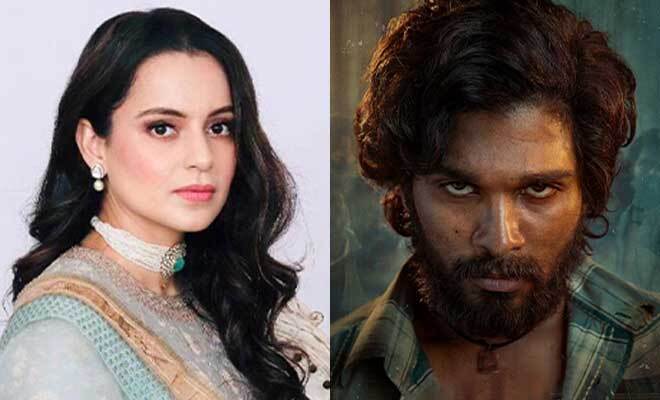 We are aware of the craze of South Indian cinema and they totally deserve it. This reflects in the current situation at the box office as well where South cinema didn’t fail in their mission and delivered some of the highest-grossing films. Currently, Allu Arjun and Rashmika Mandanna’s action-drama film Pushpa: The Rising is topping the charts and giving a tough fight to Bollywood films. While many fans are praising the film, Kangana Ranaut being the ‘Queen’ of Bollywood that she is, explained the rage about the South content and superstars. She also took a dig at Bollywood which is not anything new now, TBH!

Kangana Ranaut is one of the most successful actresses in Indian cinema and she has proved that by delivering outstanding performance in many films. Recently, she posted a story on her social media account and caught everybody’s attention with her short review on South movies and superstars. After the success of Pushpa: The Rise, she highlighted an article in the story and explained the rage about South cinema and superstars as the hit track ‘Oo Antava’ featuring Samantha Ruth Prabhu from the film Pushpa plays in the background. The Queen actress wrote that South films are deeply rooted in Indian culture. It also highlights the love between families and its conventional and not westernised. Kangana mentioned that South actors have certain professionalism and passion that is unparalleled. “Some of the reasons why South content and superstars are such a rage…1) They are deeply rooted in Indian culture, 2) They love their families and relationships are conventional not westernised, 3) their professionalism and passion is unparalleled,” she wrote. 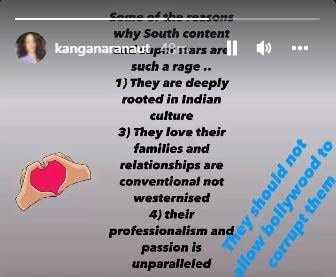 She also gave a piece of advice to them that says, “They should not allow Bollywood to corrupt them.” Hmm, the Panga actress never misses a chance to take panga with Bollywood!

Talking about her professional life, Kangana Ranaut will be seen next in the film Tejas. She will also feature in Dhaakad, Manikarnika Returns: The Legend Of Didda, Emergency, and The Incarnation: Sita.

IMDB Releases List Of 10 Most Anticipated Indian Films Of 2022, Kangana’s ‘Dhaakad’, Alia’s ‘Gangubai Kathiawadi’ On It