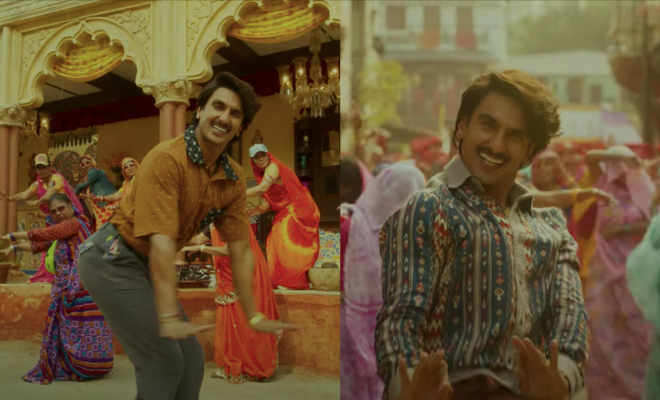 Recently, the trailer of Ranveer Singh starrer Jayeshbhai Jordaar was released and to say that the response has been good would be an understatement. The social comedy-drama film is one of the most anticipated movies of the year. And the first song from the film ‘Firecracker’ has been released and we cannot stop grooving to this song. Ranveer Singh can be seen dressed in a very Gujarat style shirt and trousers as he dances on the streets surrounded by women in sarees and ghoonghats. Well, guess this song is going to be the newest party anthem of the year.

Take a look at this dhamakedaar song.

Written and directed by Divyang Thakkar and produced by Aditya Chopra and Maneesh Sharma under Yash Raj Films, Jayeshbhai Jordaar stars Ranveer Singh, Shalini Pandey, Boman Irani, Ratna Pathak Shah and Deeksha Joshi in pivotal roles. The film follows the story of a Gujarati man, Jayesbhai Patel from an orthodox family who does not believe in gender equality and equal rights. But Jayeshbhai feels differently and when it comes to the life of his unborn girl child, Jayeshbhai goes all out to stand up against his family and fights to save her life.

Also Read: ‘Jayeshbhai Jordaar’ Star Shalini Pandey’s Zarbardast Summer Wardrobe Is Everything You Need To Beat The Heat This Season!

And if the trailer wasn’t enough to make us want to watch this film, the song ‘Firecracker’ really has us wanting more. For the uninitiated, Jayeshbhai Jordaar is all set to hit the theatres near us on May 13 after much delay. So, I’m going to be blocking my days to watch this social comedy-drama and in the meanwhile, I’m going to groove to this song. What about you? Let us know in the comments below.

‘Jayeshbhai Jordaar’ Trailer: Ranveer Singh Goes On A Hilarious Journey To Save His Unborn Girl Child. The Social Message Is Kaafi Jordaar!