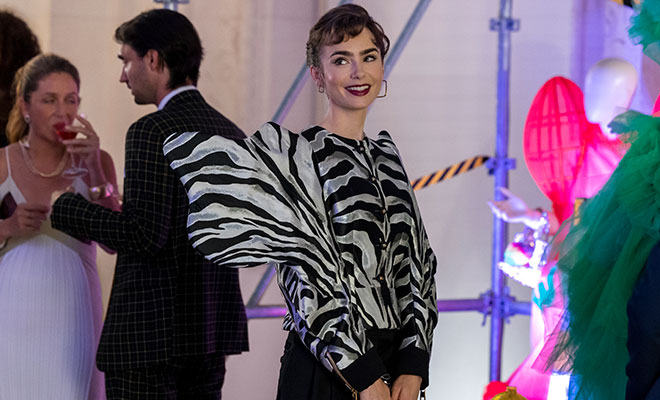 Ma chéries, the trailer for Emily In Paris Season 3 has just dropped like hot, freshly baked cookies on Christmas morning. And it is indeed a treat for fans, especially, if y’all, like me, are suckers for holiday rom-coms and Hallmark Christmas movies. Because Emily Cooper’s life may not be going all that well on screen, but this Netflix series, headlined by Lily Collins, is a nice, easy-breezy watch with lots of hot people, romance, haute fashion, and chick-flick moments to make for the perfect holiday season binge. And if the Season 3 trailer is any proof, we’re in for double the delicious drama.

Emily Cooper is one hard worker, whether it is her professional life or personal. But can she continue being this efficient if she’s juggling two of each? Emily In Paris Season 2  (read our review here)ended with Sylvie and her team leaving Savoir to start their own firm. Sylvie even offers Emily a place in her new agency, but that would mean Emily has to break up with her American boss/BFF, Madeline! A real Sophie’s Choice for Emily. And if you thought the confusion in her love life had cleared up, it only gets worse in Season 3. Sure, Emily’s chosen Alfie, but she still hasn’t resolved her feelings for hot chef Gabriel. So expect more longing looks, awkward close moments, and some more drama perhaps with Camille!

The Season 3 trailer gives us a glimpse of Emily juggling between two jobs, as she tells bestie Mindy that neither of her bosses knows she’s pulling a double shift. She’s still struggling with her French class, and some of her fashion choices might still be very American and rather ringarde. But I have a feeling the further we go in the series, the more Emily’s tastes will refine, her French better, and her feelings for her one true love (it has to be my man Gabriel, okay?) will emerge clearer. As the tagline for this season says, tourist season is over! It’s time for Emily to start being a true Parisienne!

Take a look at the Emily In Paris Season 3 trailer here:

Despite the criticism, I have enjoyed Emily In Paris as the perfect escapist show that I can repeatedly watch. I particularly enjoy what it’s doing with characters like Sylvie, with her open marriage and dating a younger guy, and Camille, who refuses to let a man define what she should and shouldn’t do with her life. I cannot wait to unwrap this gift of more glam, exotic and luxe locations, and of course some steamy romance this season.