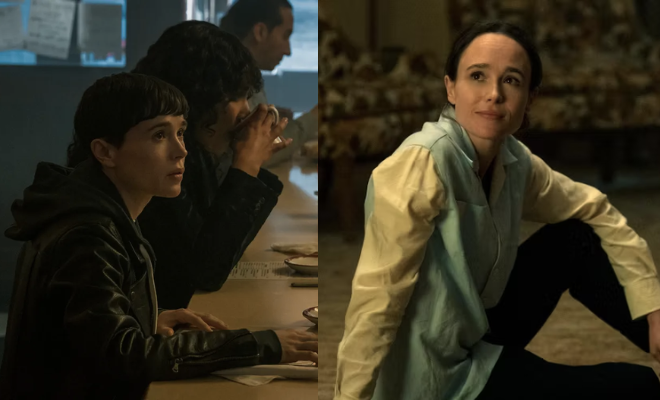 Being heterosexual comes with its own privileges but that’s not the case with the people from the queer community. Not only do they struggle with their rights but also with their identities when we discover their true selves. No thanks to our society. And their transition is a lot harder. Season 3 of The Umbrella Academy deals with the transition of a queer character. In the show, Elliot Page’s character Vanya Hargreeves undergoes a transition and becomes Viktor Hargreeves. The trans transition of the show is a part of his character arc and mirrors Elliot Page’s real-life transition after he came out as a trans man in 2020. Time and again, The Umbrella Academy has been hailed for the seamless transition and now, the actor Elliot Page has opened up about it and hailed the makers of the show for it.

In an interview with The Hollywood Reporter, Elliot Page shared that according to him, the most special thing about it was how it was handled while adding that it wasn’t “void of emotional moments with the siblings”. Speaking further about the transition of his character into a trans man, Elliot shared that the scenes resonate with him as he is a trans person and has been having new experiences much like his character. “We don’t see that when we’re not in control of our stories a lot of the time,” said the actor. He went on to add that the transition is not the main focus of his character and rather it happens naturally and there are moments and themes that are relatable.

Also Read: Elliot Page Talks About The Reaction After Coming Out As Trans Man, Says Transphobia Is Extreme

For the unversed, born as Ellen Page, Elliot Page announced his transition from female to man in 2020. While coming out on social media, the actor revealed his name Elliot and also specified his pronouns as he and they.

On the same day, Netflix had announced that it would update the actor’s credits in all his films and series to reflect his new name and identity which was completed within one week. Later, in an interview, the actor went on to describe himself as queer and non-binary and shared that he had been recovering from top surgery when he came out. Soon after, while speaking to Esquire, Elliot had shared that he had been targetted by transphobic trolls and received immense hate online.