Emily Ratajkowkski, Sara Foster And More Call Out Adam Levine Over His Explanation For Cheating Allegations 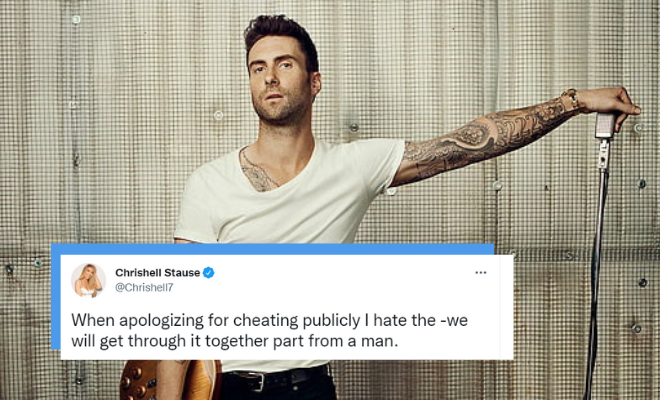 Cheating between couples, married or not, in Hollywood isn’t new. We’ve heard it before and we will hear it again. The most recent scandal revolving around this is the allegation that Adam Levine cheated on his wife, Victoria’s Secret model, Behati Prinsloo. Levine has since gone on to deny the allegations and claimed that he simply flirted with model Sumner Stroh and didn’t have an affair with her. His apology and explanation have had mixed reactions but many celebs have come forward to voice their opinion on the situation.

Adam Levine is finna be going through it bucko. Holy smokes this woman spilled all the beans. That naming the kid part is effing SICK. Yikes. pic.twitter.com/6GWKWl7Vc8

Chrishell Stause was one of the many stars to come forward and call out Adam Levine over his apology. She said that he hates the kind of man that says “we will get through it together” referring to the words of his apology. She also asked him to not “speak for her” as he’s already “done enough”. Actor Sara Foster also spoke about this scandal on TikTok. She attacked Sumner saying that she didn’t need to publicise her affair and could have simply spoken to Behati in private. She further said that she does not feel sorry for Sumner as she knew she was getting involved with a married man.

When apologizing for cheating publicly I hate the -we will get through it together part from a man.

On the other hand, Emily Ratajkowkski believes that Sumner is a victim in this situation too. She pointed out that Sumner was young while Levine was an older man in power which imbalances the power dynamics between them. She further said that since Levine was the one in a relationship, he was responsible for his loyalty toward Behati.

The only person I feel bad for here is Behati Prinsloo. I cannot imagine the hurt she must be going through after finding this out about the father of her two children. Because I don’t think it matters if he cheated or simply flirted, both of them are hurtful. At the end of this, I simply hope she’s able to heal from all this and takes decisions that are best for her and her children.

Jennifer Lopez And Ben Affleck Get Married In Las Vegas And Fans Get All Mushy Over Their 20-Year-Long Love Story!