‘Adipurush’ Teaser: With Prabhas Saying Bhaari Dialogues, Kriti Getting 0 Lines And Saif Only Laughing, It Was Quite Underwhelming! 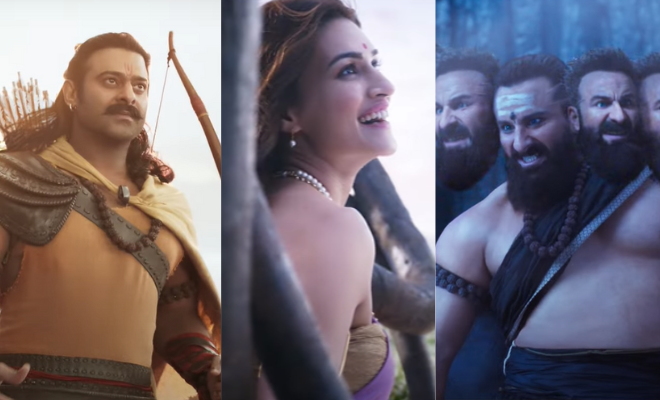 One of the highly-awaited films Adipurush‘s teaser has dropped! The film sees the never-seen-before casting of Kriti Sanon, Prabhas and Saif Ali Khan. The film is directed by Om Raut and produced by T-Series Films and Retrophile. The movie is shot in Hindi and Telugu. We were quite excited to see what this trio brings to our screens with the story based on Lord Ram and his victory over Ravana to bring home Goddess Sita. But the teaser fizzled all the excitement out!

The one-minute-46-seconds teaser starts with Prabhas meditating underwater and in the next frame he shoots down a Dementor-like looking demon (you’ll get the reference if you are a Harry Potter fan!) And then, Saif’s character is introduced as Ravana who is seen riding a dragon which makes Chota Bheem‘s animation look a gazillion times better! While laughing evilly, he also sprouts his ten heads who all laugh along with him.

The rest of the teaser is all about Prabhas narrating how he is going to come to slay Ravana and make goodness emerge victorious over evil. In a very brief time frame, Kriti Sanon is introduced as Sita who has no dialogue and is just smiling as she enjoys taking a leisure swing on a branch!

There are so many things problematic with the teaser itself that I now, I am not sure I want to see what the trailer has in store for us! Beginning right with the VFX, they are crappy AF! Looks like a beginner’s job, the VFX in the film. Everything is so animated that even the characters do not look real. The makers forgot to differentiate between the living and the animated characters.

And what is with all the dialogues being given to Prabhas, and leaving nothing for Kriti? This is so not done! Prabhas just keep shooting all the dialogues throughout the teaser while Saif just manically laughed and Kriti smiled. That was all!

I won’t even call them the saving grace but the heavy-worded dialogues were what kept the teaser afloat. But the visuals were so bad that you could even focus on what the dialogues were because you kept getting distracted by the immature special effects. Why do the most-hyped projects always turn out to be underwhelming?

‘Kesariya’ Dance Mix Teaser: Alia, Ranbir Are Grooving To This ‘Brahmāstra’ Love Anthem But We’re Not!