‘Kesariya’ Dance Mix Teaser: Alia, Ranbir Are Grooving To This ‘Brahmāstra’ Love Anthem But We’re Not! 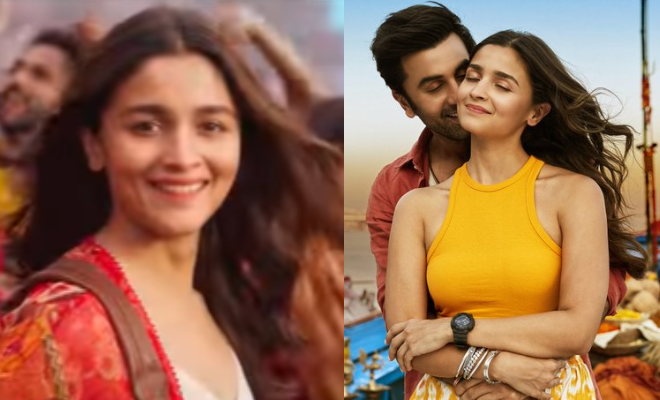 If you will tell me to name the most hyped movie of this year, my answer will be Brahmāstra: Part One – Shiva directed by Ayan Mukerji and I think many people will agree with me. And if we are mentioning Brahmāstra, then there is no way we are not discussing the song ‘Kesariya’, the track marketed as the ‘love anthem of the year’ turned out to be a huge disappointment for all the music lovers but it was quite surprising that everyone was playing it on loop for some unknown reasons. Well, the makers have dropped the teaser of the dance mix of the song featuring Alia Bhatt and Ranbir Kapoor but we are still vibing to it, to be honest!

As promised, Ayan Mukerji is on a mission to release the entire Brahmāstra music album. Having said that, he dropped the teaser of ‘Kesariya’ (Dance Mix) which is a ‘groovier and dancier’ of the original song. Sharing the teaser of the song on his social media account, he mentioned that before ‘Kesariya’ became the song we all know and love today, it was a more of a groovier version but he realised that Brahmāstra: Part One – Shiva needed a more romantic version of this song and that’s how the original version of the romantic track was created.

Furthermore, he said that he decided to release this version of the song because the film has been released and the festive season is also here. Ayan mentioned that it is called ‘Kesariya’ Dance Mix.

Take a look at the ‘Kesariya’ Dance Mix teaser here:

A few days ago, another song called ‘Rasiya’ from the film was released and many people are saying that it is more romantic than ‘Kesariya’ as it beautifully tells the love story (or love storiyaan) of Isha (Alia Bhatt) and Shiva (Ranbir Kapoor). Sung by Shreya Ghoshal and Tushar Joshi, the song is composed by Pritam Chakraborty. Amitabh Bhattacharya has penned the lyrics of the romantic track.

Meanwhile, the entire Brahmāstra music album will be released by October 5. Till then, you can vibe to the ‘Kesariya’ dance mix if you want!

Songs Have Always Been The Brahmastra Of Birthday Boy Ranbir Kapoor’s Films. We Picked Our Favourites