The Teaser Of ‘83’ Starring Ranveer Singh And Deepika Padukone Is Out! He Recreates The Iconic Catch By Kapil Dev. 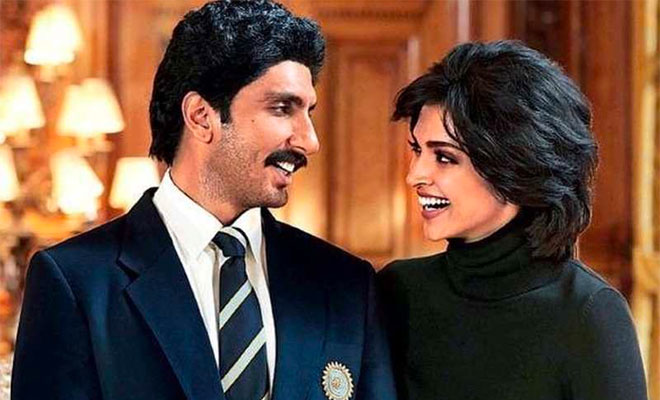 The movie 83 starring Ranveer Singh as the former cricketer Kapil Dev, along with and Deepika Padukone, Pankaj Tripathi and more, has been creating a lot of buzz for quite a long time now. Recently, a teaser for Kabir Khan’s sports drama 83 was shared online. From the video, we can see a recreation of an iconic moment from the 1983 cricket World Cup final at Lord’s, where India defeated West Indies to win their first-ever World Cup. You can already feel the intensity of the whole match from the short scene.

The video recreates the wicket of Viv Richards, who was caught out by Kapil Dev with Madan Lal as the bowler. The Gully Boy actor could be briefly seen in the teaser who is about to take the catch while the whole stadium is watching him holding their breath. Harrdy Sandhu and Jatin Sarna can be seen in the teaser.

The lead actor of the film, Ranveer shared the teaser of 83 on his Instagram handle and wrote, “The greatest Story. The greatest Glory. 83 RELEASING IN CINEMAS ON 24TH DEC, 2021, in Hindi, Tamil, Telugu, Kannada and Malayalam. Teaser out now. Trailer out on 30th Nov. #ThisIs83.” Ranveer’s industry friend filled the comment section sharing their excitement with him. We love some star interaction! Deepika Padukone also shared the video on her Instagram page who is playing Kapil Dev’s wife Romi Bhatia in the movie. The Bajirao Mastaani actor’s fans are super excited to watch the beautiful couple together on the big screen.

Earlier, in an interview, Deepika shared her thoughts on working with her husband Ranveer in 83. They have previously acted together in films such as Goliyon Ki Raasleela Ram-Leela, Bajirao Mastani and Padmaavat. “It was nice to work with Ranveer in a slightly more realistic setting. Not having to mouth such intense dialogue with that kind of language like we did on three films. It was refreshing. In fact, we had to remind ourselves that this is the same actor that I’ve worked with,” she said.
Pankaj Tripathi, Boman Irani, Saqib Saleem and Tahir Raj Bhasin can also be seen in the film among others. 83 is scheduled to release in theatres on December 24.