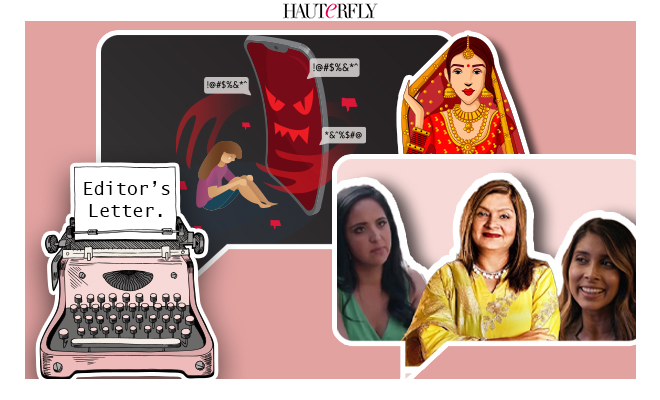 Editor’s Desk: We Women Are Carrying The Burden Of All Of The Sanskaar

‘You will have to compromise.’

There are the words extensively used by Sima Taparia, who, as she says several times on the show, is a matchmaker from Mumbai. This is a woman who is done with all the demands of the people she makes matches for. But there is a pattern running through this all – that she finds women who have standards- even some basic ones, incredibly difficult to match. And she sighs every time someone with what she calls ‘unrealistic’ expectations turns up. Except for when Akshay’s mom turns up on screen and sounds like an absolute nightmare to live with. Then Sima is A-okay to deal with her because of course, a mom who sounds like a tyrant should be given a free hand in these things. We discuss this on Hauterfly today. We also discussed yesterday, and these are from the first hand experiences of the women in our team, that while it may be cringe, Indian Matchmaking is also a reflection of reality.

Today, we also cover how all the sanskaars are essentially held up by Indian women with men having no reason to take the load off the shoulders. Most of them actually, would happily add to our load. There’s a story we are doing today about how an Indian guy asked what was stopped Indian women from touching their husband’s feet. Mainly because we don’t see any reason to do so. Also, fuck you.

There’s also a story we are doing about how a woman wearing a bikini was asked to cover up by another woman because, get this, her sons were staring. OMFG. Ask your sons not to stare then. FFS.

Basically, at any point, Indian women carry the boatload of sanskaars that men and women in this country want to see us buckle down under. But you know what? We are done carrying this extra weight. The weight of expectations and how we are supposed to behave. We are putting this stinking pile of shit down and letting everyone pitch in to do their bit. We are done with being the torchbearers of good behaviour. And if it doesn’t sit well with you, well, suck it up.

ALSO READ: Editor’s Letter: Whoa, What A Roller Coaster Week This Is Going To Be