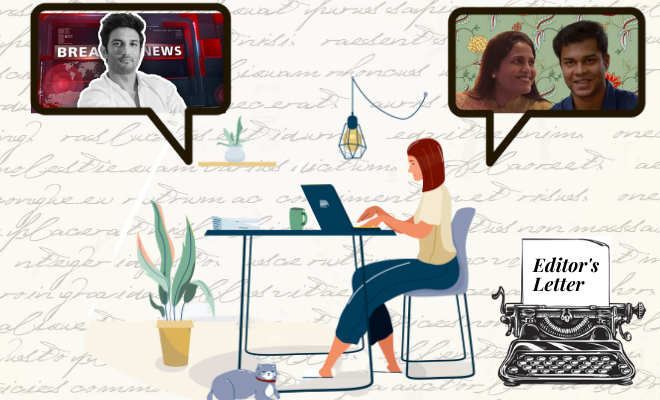 The thing about Wednesdays is that we don’t really feel anything towards them. They sit in the middle of the week, so there isn’t much scope to hate it or love it. It’s the day where you are kind of inching towards the weekend but haven’t fully made it there. See what I mean by ‘I feel ambivalent towards it?’

But let’s discuss this week. I mean, till Wednesday atleast. This week I learned that someone had alleged that Sushant had sexually harassed his Dil Bechara co-star Sanjana Sanghi. SSR’s death has became a free-for-all carnival now, with people talking about him, his intelligence, his telescope and even then, it was okay. That people are calling it a murder, asking for a CBI investigation and giving hits on Youtube videos that claim to talk to his spirit – it’s getting out of hand, you have to admit.

A lot of Bollywood’s skeletons have come tumbling out of the closet. Everyone’s willing to talk about how they were sidelined or replaced and while it may not change anything now, it could be cathartic for them to speak about it. Like an injustice has been corrected.

Besides this, literally everyone is talking about Indian Matchmaking. What is that show even? Admittedly, we have all watched it for the cringe or maybe because there are so many memes, that you just needed to get context. Today, we talk about the woman everyone is talking about. Nope, not Aparna. Preeti aunty, who is Akshay’s mom and has severely impaired her son from being able to make a single rational decision. That right there is an example of toxic femininity. We’ve heard of toxic masculinity, we know what it looks like. But I am thrown off by this flamboyant display of women who infantilise men, fully grown adult men rendering them less interesting than a piece of wood.

I learned that today. That women can be women’s worst enemies but also that, a lot of men enable this behaviour and see nothing wrong with this. Eeeks. This show gives me the heebeegeebees. But watch the show, it’s going to become a sub-culture that you will be invested in.