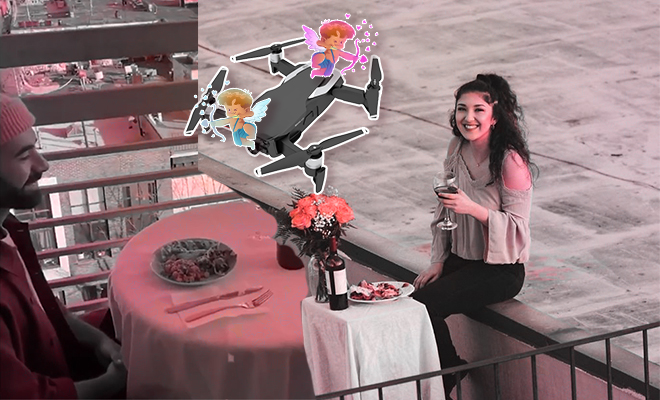 A Man in NYC Asked A Woman Out Using A Drone And Now They Are Enjoying Their Virtual Dates. Why Don’t I Have Such Neighbours?

All those who are quarantined with their partners are really lucky, unless you don’t get along well. In that case, I’d prefer to be quarantined alone. However, couples in healthy relationships are enjoying this period of lockdown and using this time to bond, which is a great idea. We are so busy in our lives with our work and social commitments that we don’t have time to spend with our people. And now we do and in abundance.

On the other hand, there are us singles, who are having a rather loveless quarantine. Not like I was looking out for cuties, but now I can conveniently blame it on our fate. While a lot of us are craving some romance, Jeremy Cohen, a 28-year-old freelance photographer in NYC found himself a girlfriend in times of quarantine.

Last week, Cohen was just bored at home when his eyes fell on a woman who left him intrigued. She was dancing on the rooftop of a nearby building. Even though they lived so close, they had never met before. He liked her fun personality and decided to say hi. Of course, the fact that he had nothing to do can be a less romantic reason but we’ll just pretend it doesn’t exist for the sake of the story.

So he waved from his balcony and the woman waved back at him! The woman identified as Tori Cignarella, a 23-year-old hospitality professional told BuzzFeed that she was dancing on We’re All In This Together when she saw a cutie waving at her. They tried to speak over the distance but could barely hear each other. This is when Cohen had a brilliant idea. He yelled, “Can I send you something? Wait for like 20 minutes, I’m going to send you something.”

I can’t believe this actually worked and yes this is a real story pic.twitter.com/X5KbBl0qIe

Cignarella was taken by surprise when she realised that he actually sent his phone number written on a piece of paper through a drone! Cohen was feeling anxious because it had been an hour and Cignarella hadn’t texted him. Then finally she did! “You can see me holding my phone up and then it’s placed behind me in the video, and that was because it died right in the middle of him sending it over. I had to wait until I got back to my apartment and plugged it in before I could actually reach out to him,” she explained.

They have been texting, FaceTiming and even went on a virtual dinner date! “I was freaking out. Not in a bad way of course! I just couldn’t believe that this was happening. I had a whirlwind of emotions,” Cignarella expressed. Of course, this wasn’t a run-of-the-mill meet cute. Then again, nothing about this phase is what we ever fathomed.

PART 2. Her name is Tori. She’s cute and kind and I’m sor happy I met her pic.twitter.com/tyo0AItBbd

As an ode to their unique meet cute, Cohen made a video of their dromance and posted it on Twitter. It’s got a great response as people all around the world are dropping their jaws and awws at this love story. The video has more than 413k views.

“It’s pretty exciting for everyone to be rooting for ‘us’. Hopefully something works out, but if not I’m just glad I shot my shot,” Cohen said. He further asked, “Also, if we’re quarantined for a long time, would this be considered the first ever long distance relationship across the street?”

Both Cohen and Cignarella are really excited to meet in person. This already seems like a long-distance relationship to me, except they live across the street from each other and can wave at each other anytime. Of course, they have FaceTime and all that but nothing like seeing the person in person, right?

ALSO READ: Social Distancing Is Making Couples Feel Like They Are In A Long Distance Relationship. Here Are 5 Signs You Can Survive It.

I hope this romance doesn’t become one of those done out of boredom. However, there’s a lot you can learn from this modern-day fairytale. Firstly, a cutie could be right around the corner but you’re too busy/blind to see! Secondly, make a move. Thirdly, when somebody makes a move, be open and receptive. Lastly, dance on rooftops and be happy. Happy girls are really attractive! I am gonna keep these things in mind and see if I can break my bad love spell. Until then, let’s just read cute love stories and feel hopeful!