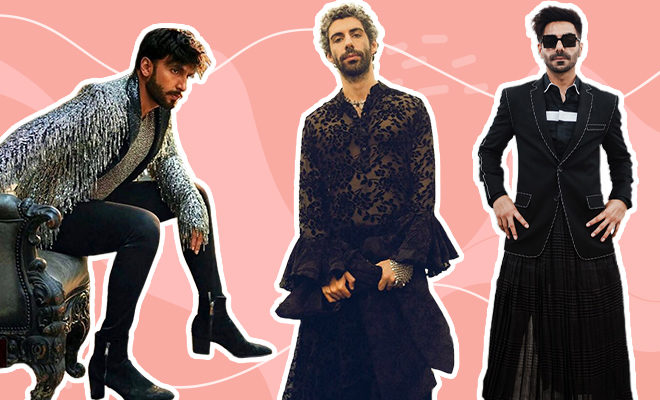 For the longest time, men’s and women’s fashion has been different in a lot of ways. Not just prints and colours but designs and aesthetics too. However, lately the fashion industry has been striving to blur that line between the two categories of fashion by introducing genderless and gender neutral clothing and accessories that cater to both men and women equally. However, it’s weird that while women wearing pants isn’t really absurd or laughable, a man rocking women’s fashion is often viewed as wrong and ridiculous. Well, fashion is a personal choice and if you think your fragile man ego cannot handle a skirt, that’s fine. But why do people feel the need to bully and troll men who want to rock androgynous fashion?

I am particularly referring to the constant trolling that Ranveer Singh is subjected to whenever he breaks the gender norms of fashion by wearing women’s wear and makes a strong statement with his androgynous sartorial choices. And it happened again recently when a user posted a cropped picture of him in heeled boots from a 2018 shoot of a magazine. Looking at the heels, everyone quickly assumed it was a woman and started guessing the person in the photo to be Priyanka Chopra or Shraddha Kapoor. But when the full photo was posted with Ranveer in it, the comment section was flooded with troll, homophobic slurs and some even targeted the LGBTQ+ community. *rolls eyes*

Also Read: A Woman On Twitter Asked If There Are Any Men Who Follow A Basic Skincare Routine. And, There Are

Well, we are not here to talk about men who think women’s clothing is a bit too intimidating for them but real men are not threatened by women or their clothing and can pull off a lacy top, or an anarkali, a dress or even heels without feeling inferior. Take these cool men (the heroes as you might call them) from Bollywood and Instagram who proved that androgynous fashion doesn’t make them any less of a man.

Apart from Ranveer Singh, one actor who has embraced androgynous fashion is Aparshakti Khurrana. From wearing women’s shoes to rocking a skirt and carrying a sling bag or wearing a ruffle top, he has done it all and could give a macho man a run for his money while at it. See he doesn’t have to wear pants to look manly. He is doing it brilliantly by pulling off women’s clothing like a man.

Jim Sarbh has an impeccable style and has nailed androgynous fashion a number of times too. He often wears floral print shirts, shrugs, lacy tops and one time, he even wore a dress for a magazine shoot. How cool is that. He even indulges in skincare unapologetically, which is also another thing that men are trolled for. Get over it and learn from Jim.

Not just Bollywood stars but a lot of male influencers are also making a convincing case for genderless fashion on Instagram. Siddharth Batra who has a following of over 170k is often trolled for wearing feminine clothes and jewellery and doing his nails. But that doesn’t stop him from creating great content and posing super stylishly for men (straight or not) who love these things and we love that about him.

These men are the biggest advocate of genderless fashion and we doubt it even bothers them when people online troll them but what we don’t understand is that if women can wear pantsuits and literally anything from menswear without their femininity being threatened, what’s wrong or funny about a man wearing a skirt, or heels and carrying a sling. Can we grow up and let everyone wear what they want, be it a saree or pants. Can we ever move past these fashion stereotypes and respect each and everyone’s choice to wear clothing that speaks to them? I mean, they are not hurting your sense of identity or threatening your masculinity, so how does it matter? In fact, I feel if your masculinity is so fragile that wearing women’s clothes make you feel less like a man, then maybe you are.

Also Read: This Male Influencer’s Post About Wearing Eyeliner Has Internet Divided. It’s Not Path-Breaking But Let’s Not Dismiss The Dialogue Around It