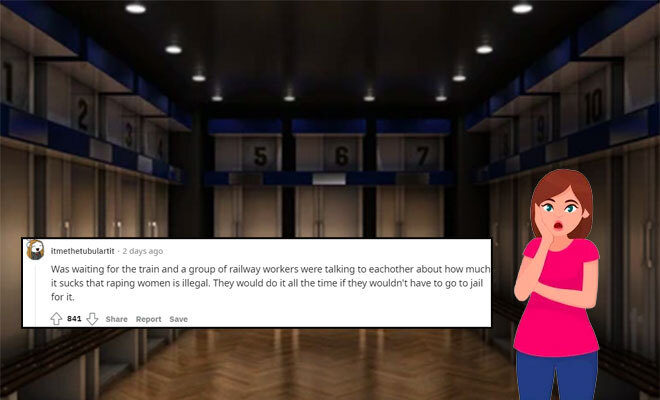 Women Of Reddit Open Up About The Horrors Of Men’s Locker Room Talk And I Was Not Ready For This!

Urban Dictionary defines locker room talk as, “Any manner of conversation that polite society dictates be held privately – with small groups of like-minded, similarly gendered peers – due to its sexually charged language, situations or innuendos.” Now, of course, most of us can relate to the fact that we might be more comfortable talking about certain topics with people who identify as the same gender as us. No matter how close you might be, you aren’t gonna be comfortable talking about your female bodily issues with your male best friend (or maybe you are, congratulations on having a dope male friend!). However, there is a huge difference between women’s locker room talk and men’s. While I have heard a lot about the kind of stuff men discuss privately, I have never heard their locker room talk first-hand. Luckily for us, some women have and they came together when Reddit user u/OrganicGas4568 asked on r/AskWomen, “Have you seen “locker room talk” amongst guys first hand? What was it like?”  And the answers were beyond appalling.

Some women lost respect for their male friends after listening in on their locker room talk. Ugh! misogyny has no age,

This one is just plain disgusting and vile,

Also Read: Indian Reddit Users Give Their Opinion On Marriage Free And Child-Free Life And The Answers Make So Much Sense!

… and of course, how can we forget harassment of women at the workplace under the guise of casual locker room talk?

Some trans women had pre-transition stories from when they had to be physically present for these locker room talks,

Safe to say that my perception that sexism and misogyny are mainly limited to the boomer generation is broken. As much as I get the need to have private conversations and discuss the opposite gender with one’s peers, there has to be a limit to what one considers ‘casual’ or a ‘joke.’ Women (or anyone, for that matter) being constantly objectified, abused, raped, sexually assaulted and harassed are not topics one romanticises as sexual fantasies. If someone has such ‘fantasies’ there is something seriously wrong with them. Stop being openly sexist and disgusting and trying to pass it off as casual jokes and locker room talks.

Redditors Talks About All The Times They Had A Pregnancy Scare And The Responses Are Astonishing!