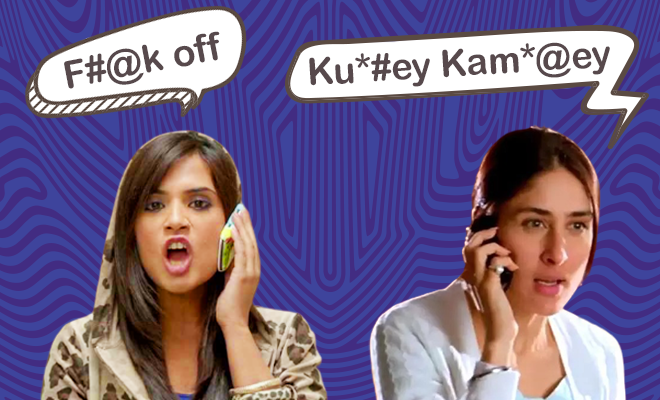 Why Swearing Is Actually F*cking Good For You, Explains Science

Swearing is one of those things that have a lot to do with taboo and gender scripts we’ve experienced. A man may go on to say the most derogatory abuses, all revolving around the maas and behens of the one they’re being fired at. But nobody will find him to be repulsive. It’s so normalised even though that is quite shit and is centered around treating women as torchbearers of shame. However, when a woman utters a word that doesn’t quite fit the socially appropriate method of expression, people start making a big deal out of it.

I was at a family event when a server dropped a bowl of green chutney on my dress and I mouthed “f*ck” almost like a whisper. But it became the talk of the night and Punjabi aunties took great joy in making a big deal of an effortless, reflexive cuss word. I mean, if that’s what they call an abusive word then haven’t they ever heard their husbands a.k.a Punjabi uncles swear?

Maybe it’s just the social conditioning that makes our society go “haww” when a woman abuses. I did too if anyone abused; I hated swearing and I still don’t like gendered slurs. When my elder sister called me a bitch back when she was in college and I was in school, I was pissed and criticised her for using “such” words. Then I grew up and that became normal. A while later, “f*ck” was added to my vocab and it was the most flexible word in my dictionary. “F*cking awesome!” “Oh, f*ck!” “F*ck this shit!”

Turns out, swearing is actually not a bad thing at all! If you’re not a chain-swearer (in which case, you become desensitized to the benefits!) it’s all good and does make you look cool, and not in the way you think!

“When I am giving talks on the psychology of swearing I usually end with transcripts of the final utterances of fatal air-crash pilots, captured on the black box flight recorder because, unsurprisingly, many of these feature swearing. I use it to emphasise an important point: that swearing must be important given its prominence in matters of life and death,” explains Dr Stephens, who worked on research linking swearing and emotions.

“The person who says ‘sh*t’ when dropping a tool on her foot, or spilling the coffee all over her computer, is being transparent about her feelings. She is expressing, in an emotionally charged way, what she is feeling in the moment. To outwardly pretend as if everything were alright, while internally being very upset, is to intentionally distort the facts. That’s a way of failing to be honest,” wrote Dr. Christian Miller in Psychology Today. That’s what I was doing saying “f*ck” when a waiter dropped chutney on me. Desi families don’t appreciate honesty!

“We appear to have established a two-way relation between swearing and emotion. Not only can swearing provoke an emotional response [as shown in the swearing and pain research] but raised emotional arousal has been shown to facilitate swearing, or at least one aspect of it, swearing fluency,” Dr Stephens explained in an article in The Conversation. Remember how in Jab We Met, Geet felt so relieved when she called Anshuman up and went on a swearing spree? It’s such a release!

“And those who speak more than one language, report that swearing in their first language is more satisfying, carrying, as it does, a bigger emotional punch,” writes David Edmonds, Editor of Philosopher’s Arms in BBC. Well, I’d say do it in a language the other person doesn’t understand. Even more satisfying!

According to a study, swearing increases your pain threshold or relieves you of some of it. Researchers say that it activates your body’s production of natural, pain-relieving chemicals which have an effect similar to morphine. However, I wonder how delivery specialists handle pregnant women swearing the hell out!

“Studies have suggested that a fluency in taboo words is associated with possessing a larger vocabulary in general. Researchers who have studied swearing also say that the habit may be linked with a higher IQ,” reports BBC. Well, you’re smart and you know it.

“The health benefits of swearing include increased circulation, elevated endorphins, and an overall sense of calm, control and well-being,” Neel Burton, a psychiatrist based in Oxford, England, and author of Heaven and Hell: The Psychology of the Emotions, wrote in Psychology Today. More reasons to continue swearing, I swear.

ALSO READ:#Relationships: 5 Types Of Emotional Vampires And How To Deal With Them

“Swearing can show that we belong in a certain group, that we are able to be ourselves and wholly comfortable and secure with the members of that group. If done correctly, it can also signal that we are open, honest, self-deprecating, easygoing, and fun-loving,” writes Neel Burton in Psychology Today. When we start using cuss words for each other, we know we’ve come close.

Swearing isn’t so bad after, isn’t it?

ALSO READ: Reasons Why Long-Term Couples Are Having Less Sex, According To A Study