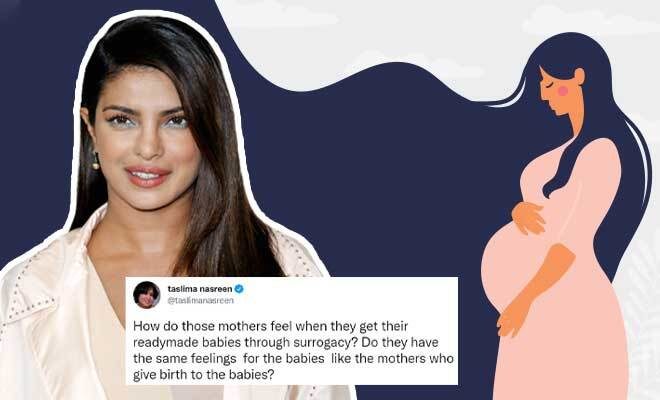 Hautetalk: Taslima Nasreen’s Question About Priyanka Chopra’s Surrogacy Choice Is Insensitive AF. Why Are Views On Motherhood So Narrow-minded?

I just don’t get this, why can people not mind their own damn business? Why is it so important for people open their mouths and then spew poison for no good reason? Especially, if it’s about a woman. This society is never really satisfied with a woman. If she covers up, she’s a prude, if she wears revealing clothes, she’s a slut. If she chooses to have a child early into her marriage, she’s in a hurry, if she chooses not to have a child, what’s wrong with her? If she does not want to work after marriage, she’s lazy, entitled and a gold digger living off her husband’s money and if she wants to work after marriage, she’s too career-oriented and isn’t focusing enough on her family and the list just goes on. Even if a woman lays down her life for others, this horrible society will still not be satisfied and they’ll find a flaw and blame her for something or the other. Something very similar happened with Priyanka Chopra. The Bollywood turned Hollywood queen and her husband, Nick Jonas recently took to Instagram to announce that they have welcomed a baby via surrogacy but how can our society just be happy for someone, hai na?

Ever since the announcement, the actress has been incessantly trolled for her choice to have a child via surrogacy. And this is coming from the people of the country where foster moms are always given more importance. We come from a country where Yashoda maa was again and again praised for raising Lord Krishna even though his birth mother was Devki. I know, this is not the same as having a child via surrogacy but if we don’t have a problem with foster mother’s why do we have a problem with a woman having a baby via surrogacy? At the end of the day, she’s the one who will be taking care of that child along with her husband. Another thing to note is that, why is it that no one, not one damn person is trolling Nick Jonas for having a child via surrogacy. Huh, I wonder why is that? Why do we as a society burden or rather force a woman to birth a child? Why can people mind their own business and respect a woman’s reproductive and personal choices irrespective of their opinions? Really, tumhe kya lena dena?

All this is even worse when this BS comes from a woman. Soon after Priyanka Chopra announced the arrival of baby Jonas, writer Taslima Nasreen thought it would be a great idea to share her opinions and take a subtle dig at the global icon for her choice. I am not even going to explain this, just take a look at those godawful tweets.

How do those mothers feel when they get their readymade babies through surrogacy? Do they have the same feelings for the babies like the mothers who give birth to the babies?

Surrogacy is possible because there are poor women. Rich people always want the existence of poverty in the society for their own interests. If you badly need to raise a child, adopt a homeless one. Children must inherit your traits—it is just a selfish narcissistic ego.

Okay, stop with the presumptions. How do you know that only poor women become surrogates? And even if they are, why are you so salty about it? If a woman wants to have a child for someone else to earn money, how is that any of your business? First of all, it is a legal process with a contract in place. Second of all, it’s their body. They can choose what they want to do with it. Have sex for money, have babies for money or just sit at home and not do anything for money. And who do you think you are to call someone who has a child through surrogacy a ‘selfish narcissist’? So, all the women who are having kids of their own and giving birth to them are not selfish but anyone who does it through surrogacy is selfish? Is it? And really this is coming from a woman who is popularly known to be a feminist! Forget feminists, you don’t even sound like a humanist. All I can see here is a vicious, vile bigoted person. Shame on you.

Okay, I get it. You are trying to stand up for the rights of women but at what cost? Insulting another woman for her choice of not birthing a child? How does that make you any better than all the sexist trolls out there? Not once did I hear you complain or question a man for having a child through surrogacy. I did not hear you question Nick Jonas about his ‘fatherly feelings’ because it was so much easier to target Priyanka Chopra for her ‘maternal instinct’, hai na? Coming to your tweet, why is it so difficult for you to accept that a woman actually wants to wear a burqa and keep herself covered up. It is all about choice and why is it so difficult to understand and accept that? Why do we need men to prove anything at all in order for women to have a goddamn choice? FYI, male escorts do exist and they also have female customers. Though they are not as much looked down upon and they have a rather glamorous name ‘male escorts’ and ‘gigolo’ but they do exist. What cave are you living in?

My surrogacy tweets are about my different opinions on surrogacy. Nothing to do with Priyanka-Nick. I love the couple.

And yet you chose to share your opinion and question the women just after Priyanka Chopra and Nick Jonas announced the birth of their child via surrogacy? You very conveniently shed the blame and did not take responsibility for something that you have most definitely done.

Let me make this clear, I have no problems with your opinion, even if it’s an unpopular one. I really do not care what you think or feel about surrogacy and the economical divide and the other contributing factors that allow a ‘rich’ woman to have a child via surrogacy (why blame men for it, hai na?). But what I do have a problem with is the fact that you chose to shame a woman, Priyanka Chopra, while expressing your unpopular opinion. Not just that, you banked on and used it to speak your two cents and spew hate while at it. I am not okay with you spreading hate and BS because a celebrity couple chose to have their baby. I am not okay with you sitting there blaming women (not couples) for having kids via surrogacy but you didn’t say a peep about the women who are giving birth to their own kids and increasing the populations (since that’s what you seemed to be concerned about). I have never heard you promote adoption and urge people to adopt instead of having kids of their own. And you have the audacity of calling people like me intolerance for calling out your double standards, hypocrisy and bigotry?

Body should not be for sale or rent. We sell our labour- power. But we must not allow invasion.

Oh so, having a child is an invasion? Then why is it okay for women to have kids of their own at all? Isn’t that an invasion? Let us all just stop having kids at all since reproduction is an invasion. But hold on, what about your invasion in all of our lives with these stone-age ideas? I’m sure your mother’s womb was not invaded when she had you. But a woman who willingly carries a child to term for another couple, her womb is being invaded? Wow *slow clap*.

Ppl are abusing me for my comments on surrogacy.They claim it's my stone-age idea to not rent wombs for making babies.I suggest to adopt homeless children&to not exploit/invade poor women's body. Actually its a stone-age idea by any means to reproduce babies for following traits.

Yes, Taslima. You are being targeted for putting down other women and shaming them for their choices. I didn’t hear you complain when you were targeting someone else. What happened now? Didn’t like the taste of your own medicine?

Also Read: Hautetalk: Malaika Arora ​Trolled For Going Braless On A Morning Walk. Hide Your Narrow Mentality Before Asking Her To Cover Up!

When women are forced to sell or rent out their vagina and uterus for being invaded, it is because of poverty, or for being financially dependent on others, it is of course NOT a 'choice'. If it was a 'choice',rich & independent women would have this 'choice', but they don't. https://t.co/X7N61h9aGV

Hold on, lady. No one is forcing women to sell or rent their wombs as you claim. If I want to rent out my vagina and uterus then I will very well do it. But I would like it if you kept your regressive idea TF away from me. What makes you think that it’s okay to shame a woman and degrade her choice by saying such vile things? And yes, it is a choice. If only you understood the meaning of it. I am not saying that there isn’t any kind of human trafficking but we need to understand that there are women who do not have a problem earning their bread and butter by having sex or children. Now, could you please get your head out of stone age and go mind your own business?

Some people are gone crazy to show I am Priyanka's enemy. But I always admire her. Prostitution, rape, surrogacy, domestic violence, male domination, patriarchy are the issues i often talk about. Here is one of old tweets on Priyanka. https://t.co/Q8IMwY7Vv0

Here is another old tweet. I loved her. I still do. https://t.co/LZ19elEOOz

Your old tweet praising or complimenting Priyanka Chopra does not justify your current actions or your nasty tweet. No one really cares about your justifications woman.

Also Read: Priyanka Chopra Had Mixed Feelings About Wearing Her Mangalsutra After Tying The Knot With Nick Jonas. We Totally Get It!

Your remarks about womb for hires, vaginas for hire, maternal instincts and surrogacy not only suck but reek of prejudice. You are the living breathing example of a wolf in sheep’s clothing. You sit there and claim to be a feminist speaking in support of women and against violations of their rights and choices yet you yourself chose to shame the same women for having a choice that is not up to your standards. You claim to be modern but your thoughts stink of sexism and misogyny. Not once did you question a man or speak of single men or homosexual couples who chose to conceive via surrogacy. You question a woman and her maternal instincts for ‘readymade babies’ but what about all the men who ALWAYS get readymade babies, ever thought to question their fatherly love and paternal instinct? Or is it not important enough for you? Huh? Also, you first questioned a woman’s motherly love for a ‘readymade’ baby since they have not birthed the child but you go on and call people who have their own kids ‘selfish’ and ‘narcissistic’ and then you suggest adoption to cover up your disgusting mindset. Well, make up your mind first. Your stance on surrogacy, adoption and prostitution is flawed, confused and sexist.  You want to support for your ‘individual opinion’ yet you cannot respect anyone else’s individual opinion and have shamed women for it. So, this is a taste of your own medicine and I hope you enjoy it.