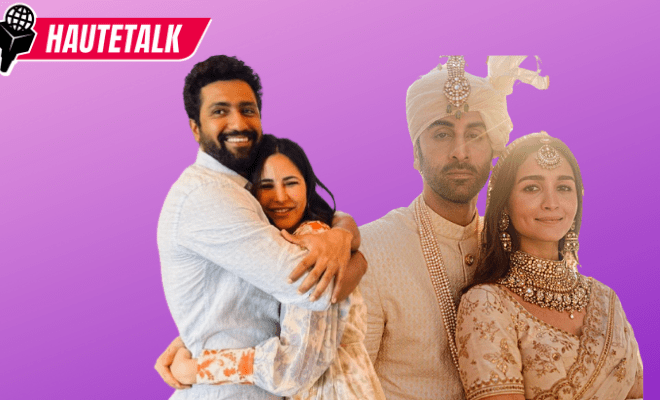 We love Bollywood stars and knowing all the deets about their personal lives and every time we want to find out who’s up to what, we turn to Mumbai’s viral shutterbug aka photojournalist Viral Bhayani. This popular B-town pap is known to hold the fort with a team of 20 boys that are on the streets keeping an eye on the celebs across the industry while Viral Bhayani sits in his office and edits all the posts for their social media which has a reach of nearly 180 million. This shutterbug is also the one who gives us the inside scoop on all the big Bollywood weddings including the Alia Bhatt and Ranbir Kapoor wedding as well as Katrina Kaif and Vicky Kaushal wedding among several others. But recently the B-town paparazzo opened up about his struggles and the pressure on paps to cover Bollywood weddings.

Speaking to Hindustan Times, Viral Bhayani shared how Ranbir Kapoor and Alia Bhatt’s wedding turned out to be scary for them as it led to sleepless nights and 3 of his boys were hospitalised due to the work pressures as they don’t get time to relax in times like that. He went on to reveal that he feels attacked every day and they’re always under severe pressure. Sharing that his boys along with other paps were stationed outside Vastu day and night during the Ralia wedding, the shutterbug went on to call it scary. He further said, “I agree that they want to respect their elders, but they could have done the same at a five-star hotel. We would have got good pictures and everything would have been disciplined. Your net worth is ₹830 crores, what are you trying to prove by doing this.”

Recalling Fardeen Khan’s wedding, Viral Bhayani shared that the actor’s father Feroz Khan threw a grand wedding and a wedding reception. The shutterbug shared that the actor treated the paps well and made sure that the paparazzi got pictures. He further shared that the family posed for them just like they did for the wedding photographer. “We pretty much got the same food as the guests had. That’s called a wedding. Yaar dil hona chahiye. Even Katrina (Kaif, actor) and Vicky (Kaushal, actor) got married but they didn’t do anything for us. Ek reception kar dete toh kya farak padta. Main sponsor karwa data,” said Viral Bhayani.

While I completely understand Viral Bhayani’s point I must point out something problematic in this situation. I understand that it is extremely difficult for the paps who fly to different locations and spend hours waiting to just get one little glimpse and a picture of these celebs and when that doesn’t happen not only do they end us losing time and energy but also a lot of effort and come back empty-handed with nothing to serve their TG. But at the same time, does being a public figure or a celebrity mean that these human beings are not entitled to personal life or choice? Irrespective of a celebrity’s net worth, they do not owe anything to anyone including their fans or the paps. Being a public figure does not take away their fundamental right to privacy and life and liberty. In most cases, celebs willingly pose for the paps but they don’t owe it to the paps or the fans to look into their personal lives or comment on it or question their choices for that matter.

So, if someone plans an ‘intimate wedding’, they can’t do so if they are a ‘public figure’? Lol! https://t.co/33gjSosiNu

How someone chooses to get married is their personal choice and it is not up for debate or discussion. Irrespective of their net worth, every human being has the right to decide if they want to have a grand wedding or an intimate one or whether to have a wedding at all in the first place. It’s not right for us to expect the celebs to behave a certain way and expect them to share the details of their personal lives with us all. While Viral Bhayani does have a point, his comments in this situation give rise to a lot of questions and highlight the little things that we have been doing wrong for so long. All this gossip-mongering and the need to know the personal details about a public figure makes me wonder what prompts us to think that these celebs, who are just like you and me apart from the fact that they act and appear on the big screen and earn a lot, owe us so much insight into their personal lives?

Okay, just think about this. What if someone questioned you about getting married in the way that you want to get married? Come to think of it, we are all just sounding like that annoyed relative who did not like the Shaadi ka khana. How are we any different if we too sit in our privileged position and expect these public figures to do things that please us and feel entitled to these things? Be it Alia Bhatt-Ranbir Kapoor or Vicky Kaushal-Katrina Kaif or any other celeb couple, none of them was obliged to share the pictures from their big day with us. They did not need to share it on social media but they simply chose to make us a part of it and had they not, it wouldn’t be right to shame them for it. In the end, we all simply have to respect the choices they make without any judgement because, IMHO, it really isn’t our place to make a statement.

A wedding is called the big day for the couple and I believe we should let it be about them and not make it about what we want from them on their big day. A couple can’t be having a lavish wedding because that’s what the people want to see. TBH, several people questioned Alia and Ranbir for keeping their wedding a low key affair and shamed Alia for wearing simple clothes and keeping her makeup natural but what gives us the right to question or shame them just because they did not conform to the social norms or lived up to our expectations of how their wedding should have been like? What they did is perfectly normal TBH. Amid the pandemic, several couples had intimate ceremonies and many people opted for a court marriage and I don’t hear anyone complaining about it. After all, it is a couple’s choice, how they want their wedding to be like and we cannot be asking or demanding for things to be done a certain way just because they’re a public figure.

Also Read: ‘Koffee With Karan’ Season 7: From Alia-Ranbir to Vik-Kat, Celebs We Want To See Spilling The Tea This Year!

And let me point this out, Viral Bhayani also went on to add that the paps often catch married actors cheating on their spouses with someone else but they never indulge in it and said that they too understand that it’s wrong. Well, we agree. It isn’t our place to judge these celebs or shame them for their personal choices. They may be wrong or may not be wrong, but they do not owe us an explanation about why they’re doing what they’re doing if it is a matter of their privacy.