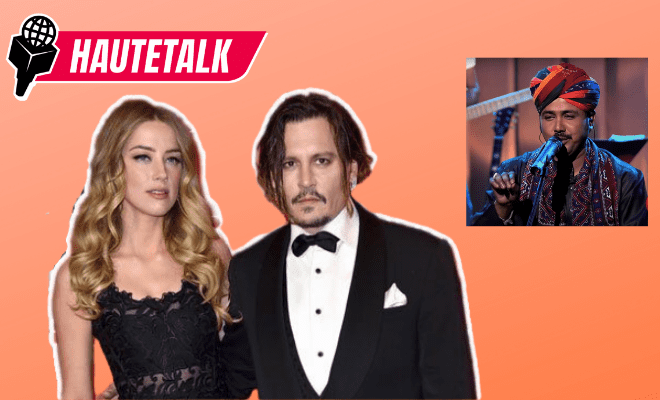 Hautetalk: Remixing Amber Heard’s “My Dog Stepped On A Bee” Clip With Music Is Not Funny. It’s Degrading!

Ever since Johnny Depp and Amber Heard’s defamation trial began, it has been making headlines for all the shocking details that have been revealed by their public trial. During their testimonies, both Amber and Johnny made some shocking accusations and revelations but sadly social media and trolls have turned their testimonies into viral reel ideas. Time and again Amber Heard has been trolled and shamed by netizens for “acting” during her testimony and making allegations and statements that the social media users deemed untrue. Now as much as I hate this whole media and social media trial being held parallelly, what I hate more are the shameful and distasteful meme-ification and viral trends being made out of this defamation trial.

Just recently, I came across this video of Amber Heard’s testimony edited by a troll along with a Hindi song and TBH, I’m infuriated. A troll edited the video from Amber Heard’s testimony where she spoke about her dog stepping on a bee with a song from Coke Studio titled ‘Chaudhary’ and while social media users laugh it out and share the video, IMHO, it’s just plain shameful and disgusting. And no, I’m not defending Amber Heard or siding with either party in the case, the fact that we’re making fun of a defamation trial where the actress shared her struggles and incidents of sexual assault and domestic violence and trivialising it is deplorable.

Sure, this case involves two public figures and has been highly publicised, dissecting someone’s testimony just for the sake of a few laughs, likes, comments and follows is beyond shameful. It is inhumane to sit in our privileged place and pass comments and laugh at another person’s life. And for those of you who, right about now, are thinking of pointing out your fundamental right to freedom of expression, let me remind you that you also have some fundamental duties one of which includes renouncing any practices that are derogatory to women and one that includes developing humanism. What every single troll across the world is doing to shame Amber Heard without taking a moment to think that both the actress and Johnny Depp were in a mutually abusive relationship and to comment on that is not our right or privilege while keeping in mind that the case is currently in court. Not only is this video disrespectful towards an ongoing court case but also towards the victims of sexual assault and domestic abuse. It is not for us to decide who is right and who is wrong in this case.

We simply have access to the case as it’s a public case but just like this, there are several other cases but not one person makes fun of it, why? Because it’s in court and it’s not our place to comment on it and because it’s someone’s personal life. Well, guess what? This case is just like any other case except for the fact that it involves celebrities. Just because we have access to some information does not mean that we take advantage of it and make fun of someone who we believe is lying. And no, this has nothing to do with her gender. My point here is that, how would you feel if you were making a statement in court and someone took one part of something you said and without any context, went on to make a song out of it? This is not like the usual ‘Rasode mein kaun tha?’ kinda song. This trial is not a television soap or a reality show for you to take bits and pieces of it for some laughs.

Also Read: Twitter User Points Out How Meme-ification Of Johnny Depp And Amber Heard’s Trial Is Messed Up. How Are People So Insensitive?

And for more context, allow me to elaborate on what Amber Heard actually said in her testimony from which this video has been taken. During her testimony, the Aquaman actress recounted an incident from a trip that she took with Johnny Depp to the Hicksville Trailer Palace where the actor allegedly got high and accused her of stealing drugs. The actress had accused Depp of sexually assaulting her by doing a cavity search while looking for drugs. While finishing her story, Amber Heard had shared that the next day their dog stepped on a bee after which they left and took him to the vet. Here, take a look at this complete testimony given by the actress.

But most of you did not know this, did you, now? Probably because most of us have been busy laughing over the “My dog stepped on a bee” video that we haven’t put much thought into why the actress said it or in what context. And the fact remains that, a part from her testimony detailing sexual abuse has been used to make fun of her and it’s repulsive to think that some of us have been sitting in the comforts of our home, not knowing much about Amber’s story but choosing to laugh over it because trolls gave us something to laugh about. IMHO, the more we like, share, comment and laugh over these videos, the more trolls will make such videos and it’s high time that we show some compassion, respect and sensitivity towards this case instead of treating it like a reality show.