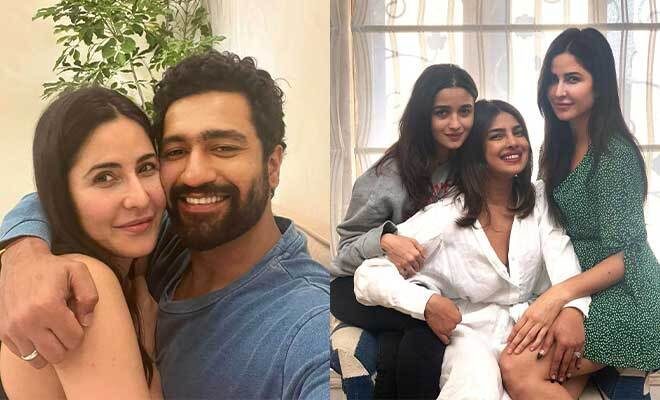 Vicky Kaushal and Katrina Kaif have been hitting the headlines ever since their royal wedding on December 9, 2021. But this time, we seem to be even more excited. Why? Because there is the slightest possibility to watch the newly-wed stars on the big screen together. Yes, you read that right. Let’s rewind a bit. Sometime back in August 2021, multi-hyphenate star Farhan Akhtar announced his next directorial titled– Jee Le Zara, starring Katrina Kaif, Priyanka Chopra and Alia Bhatt. While the selection of male lead for this interesting all-girls narrative, is still in process, a new update tells us that Vicky Kaushal has been approached for one of the three roles. As per the reports, a source close to the film shares, “The decision of approaching Vicky Kaushal to feature in the film is pure gold. Now add to that the plan is to cast him opposite Katrina Kaif, which will make Jee Le Zaraa the first film the couple feature in together. This in itself is a marketing dream and makes promoting a film much easier,” (this is too exciting).

While many male A-listers remain reluctant to participate in projects that withhold a larger chunk for the female protagonist, with Jee Le Zaraa we hope to see that breaking. The source further added, “With Farhan Akhtar casting himself and now Vicky also being roped in, that leaves just one male lead role vacant. And casting one person is far easier than three, and that too in a film that is based on three female leads.”

This indeed is a great marketing strategy. I mean considering the kind of fandom Vicky Kaushal and Katrina Kaif have curated post their marriage is unbelievably huge, and who will not want the two feature together in a film. And hopefully Katrina Kaif’s take on herself and Vicky Kaushal on Koffee With Karan –“we might look good together onscreen” will turn into reality. We’re behadh thrilled.

About the film, Jee Le Zaraa, which already has fans excited with its unique cast, it brings together the makers including Zoya Akhtar, Reema Kagti and Farhan Akhtar, the minds behind some amazing narratives like –Gully Boy, Dil Dhadakne Do and Zindagi Na Milegi Dobara. Zoya recently shared a glimpse of the trio’s ‘script session’ with black and white images of Farhan Akhtar and Reema Kagti. The road-trip film on female friendships is expected to go on floors by the end of this year.