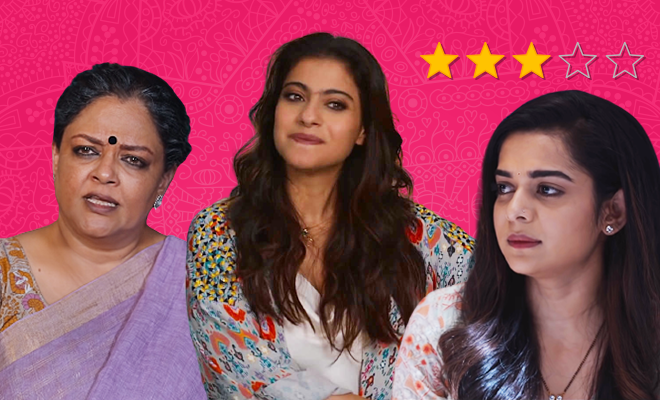 Tribhanga Review: A Story Of Mothers And Daughters To Watch For Its Themes And Not Execution

Every girl has heard this at least once from their mother… “When you become a mother no, you’ll realise!” And every child has also, at some point when frustrated or angry at their parents, vowed that they’ll do things differently when they have kids. But the reality turns out to be much stranger than the fictional ideal that both we and our parents have in our minds. Netflix’s latest offering, Tribhanga, is a film that dives into the relationships of and between three generations of women—mother, daughter and granddaughter—and presents this circle of life proposition that brings about painful realisations, heals old wounds and mends what’s broken. The film is a debut in the director’s chair for actor Renuka Shahane, and stars Kajol, Tanvi Azmi, Mithila Palkar, and Kunal Roy Kapur.

Additionally, it also stars Manav Gohil, Vaibhav Tatwawaadi and Kanwaljeet Singh, amongst others.

Tribhanga is a story of regrets, traumas, and how each generation is doomed to repeat the mistakes of the previous one, until the cycle is broken.

The film opens with Nayantara Apte (Tanvi Azmi), an award-winning writer, being interviewed for her autobiography by her shuddh Hindi-speaking student, Milan (Kunal Roy Kapur). There are enough hints at her medical condition (shaking hands) and emotional (a tinge of regret in her eyes, alcohol in her hands) as she talks about how parenting is about making choices for one’s children, and she wants this autobiography to give her’s the chance to chastise her for all the ways she’s fucked up their lives. You feel this sense of deja vu; genius parent almost always equals to troubled children. And then you realise, we got Shakuntala Devi telling us the same story last year.

Sure enough, Nayan’s daughter Anuradha hates her mother. Anu is a famous actress and a Padma Shri award winning Odissi danseuse. She has to leave her recital mid-way to rush to the hospital because her mother, who she calls by her name, Nayan, is in the hospital. Alongside her are her daughter Masha (Mithila Palkar) and Anu’s boyfriend (Manav Gohil).

After abusing the fuck out of the paparazzi for asking her stupid questions despite the grievousness of the situation, Anu reaches the hospital and loses her shit even more upon seeing Milan there. Nayan, the doctor reveals, is in coma minus other complications, so Anu and Milan have no qualms about arguing in the hospital corridors while Nayan is being transported to a private room.

And they do a lot of talking in that hospital room, as Anu, her brother Robindro, her daughter Masha and few other people open up to Milan about why their relationships with Nayan and each other are the way they are. Milan, through his video interviews of Nayan and his third person perspective on the Apte family, in turn helps them come to terms with their own flaws, regrets and misgivings, thereby beginning the healing. Will closure finally come? You’ll see.

Tribhanga is brimming with women-centric themes. Some, it does justice to, some it doesn’t

Tribhanga is dance pose in Odissi, which Anu practices in the film. She describes it to Milan during their chats, by associating each generation of the Apte women with a pose. Her mother, Nayan, is bent in one direction. Through her story, we get the price that women pay for genius and ambition, which in Nayan’s case, was her writing.

I felt personally connected to a young Nayan’s conflict, and how she couldn’t imagine a life without writing. But the thing with life is, it’s greedy, and asks a lot from you. And if you’re someone who cannot juggle all of these expectations, it can be difficult. I often wish all I could do was read, watch and write, like that’s what I was born to do, and everything else is merely a distraction. But home chores, relationships, social commitments and working a job are things that cannot be ignored. The resulting conflict sometimes really does a number on you, and family and friends can only understand so much. That being said, Nayan’s husband is refreshingly supportive for his time.

Nayan is so oblivious to everything that’s happening around her, and she doesn’t realise her daughter and son are going through a lot. Anu spends a traumatic childhood, and her experiences shape her into the ‘tribhanga’ she is— a dance pose where the legs, hip and neck, all three are inclined in different directions. She’s the film’s tagline—tedhi, medhi, crazy—because she decided she won’t repeat the mistakes her mother made. But as someone who’s looking in from the outside, you see that’s not the case. Blinded by her need to set a strong example for her daughter, Anu thinks she has protected Masha well. She hides her pain, doesn’t form lasting bonds with men, and makes it a point to support her daughter, even fight her if she thinks she’s compromising her happiness.

Anu believes Masha is Samabhanga, an equipoise, well balanced and with none of the bends that she or Nayan have. And yet, towards the end, we find out that Masha is struggling with her own issues, which managed to seep in despite Anu’s protective bubble. That’s when the illusion shatters, and life comes full circle for the Apte women… bound by trauma and regrets, and an inability to have open conversations with each other. I liked how this moment was brought on, but the after effects were so quickly dispelled, that it didn’t have the impact they should’ve.

I love the themes around women that writer-director Renuka Shahane wants to explore in Tribhanga. There’s female ambition, gender roles, abuse, freedom of choice, parenting, regressive and dysfunctional families and regret. Not all of them are executed well, but for me, the effort counts. The execution of it somehow falters because we don’t see the character journeys happen on screen. Nayan’s is through sporadic video interviews of her’s; Anu’s are through lots of exposition and flashbacks that fail to convey the gravity of her childhood trauma. And Masha barely gets any backstory. So while you understand why she got married early and into a regressive but unbroken family, you don’t get to see how belonging to a dysfunctional family really affected her and brought her to this point.

The overarching theme of Tribhanga is regret. And we don’t see either of the three female leads go through the ruminations of that powerful emotion. As a result, it’s reduced to a very flitting aspect of their personalities when it should’ve been a dominant one. What we do get are scenes like this flashback one in school, where a teacher teases a young Anu about using her mother’s maiden name and her parents’ divorce. Later, Masha says her teacher had asked her in class, in front of everyone, how much her mother charges because she was an illegitimate child whose mother had multiple boyfriends. The very clichéd usage of these devices made me cringe; there are better ways to present this!

Performances: Kajol is too much herself, while the others don’t get enough space to flex their skills

The holy trinity of ‘modern woman’ is present here to, which I don’t know at this point if I should even bother complaining about. Nayan drinks and is an atheist; Anu doesn’t believe in marriage, smokes and abuses like a sailor. Ho gaya modern?

In fact, Kajol’s character is so different than those typical danseuses you’d expect! But that would be refreshing too, only if it weren’t a tad annoying at times. See, I love Kajol’s vivacity and attitude, but in the film, she plays herself and not a character, and at times, especially the hospital scenes, I felt like she was overdoing the loudmouth and the foulmouth of it all. And before you accuse me of sexism, no, if a male character did that, I’d be equally pissed. It’s overkill.

I felt that both Tanvi Azmi and Mithila Palkar were under-utilised somehow. I thought Kunal Roy Kapur’s writer was low-key adorable, but that constant Hindi speaking… I’m not sure if it was a caricature or seriously done!

Also Read: Kajol Said Her Father Didn’t Want Her To Marry Young But She Followed Her Heart. Is There A “Right Age” To Marry, Anyway?

Some other things that I loved about Tribhanga….

Maybe not Kajol’s performance, but I do love the way her character is in general. Those Payal Singhal outfits are so Kajol! Even her home decor is bang on! A special mention to the decision of having the flashback scenes in Marathi, a really good decision because it’s more authentic and impactful. And Kajol dropping truth bombs about the paps, sassing doctors for saying paradoxical stuff like “She’s okay but she’s in a coma” and sounding like she could co-host the Indian episode of A History of Swear Words was loads of fun!

Furthermore, I appreciate that the women had this sort of mutual respect for each other’s ambitions and decisions, despite the dysfunctional bonds between them. The male characters that mattered were all female allies (Kanwaljit Singh is still one handsome gentleman!). And the sponging scene in the hospital, where we see Anu’s façade of not caring falter a little, that was a good emotional connect for me. I’ve seen my own parents, aunts, uncles take care of their parents in old age, ignoring all that they might have said or done wrong. And I felt that emotion of forgiveness and family bond come through when Anu has to take care of her mother. The way she constantly keeps talking about her mother waking up, or joking about her cremation, is indicative that deep down, Anu’s hoping her mother gets well and she gets closure.

Verdict: Tribhanga is flawed, but its message trumps its elusive execution for me

Tribhanga has impressive ideas on paper but the execution is a little elusive. But you know what? It’s really not a dealbreaker for me. It’s a film mothers and daughters need to watch, alone or with each other, to grasp the message that the parent-child relationship can have longstanding repercussions on both their lives. And life’s too short to hold on to the regrets. So rather than regretting not watching the film, I’d say we encourage the fact that more women filmmakers are getting a chance to tell these stories about flawed women, real women.

Tribhanga is currently streaming on Netflix.