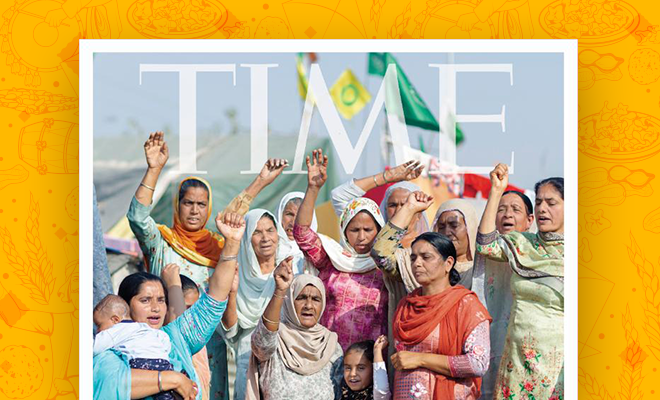 The farmer protests in India have been raging on for months now, making history as the first of its kind this agrarian country has seen, perhaps even the world. And as has been the case with most of the revolutions and rebellions our generation has seen, women are at the forefront of this one too. And why not? None more than the oppressed and wrong have reasons to protest. And who is more oppressed, wronged and unheard than women in our country? While the contribution of these women farmers, artisans, journalists and poets is being celebrated, TIME magazine has chosen them to be represented on its international cover. Quite the apt ‘cover girls’ around International Women’s Day, wouldn’t you agree?

The TIME cover has been one to always make a statement with who it puts on its cover, which is a case of pictures speaking louder than words. Previously, it has featured activists like Greta Thunberg and the women of #MeToo to make a bold statement honouring their contribution to global movements. But it has also put people like former POTUS Donald Trump, with a slightly different intention. During the Anti-CAA/NRC protests, Bilkis Bano of Shaheen Bagh was also featured by TIME as one of its ‘100 Most Influential People’ list. And this time, it chose India’s women farmers who have been leading the protest sites on borders of Delhi, our capital, to adorn its cover. They can be seen raising slogans, some carrying children in their arms, others the toils of old age. They represent quite the age range, too, from a little girl to older women.

The article, by Nilanjana Bhowmick, has a title that would probably dispel any claims that Kangana Ranaut or others have made about women at protest sites doing it all for money—“I cannot be intimidated. I cannot be bought.” The women leading India’s farmers’ protests.

Quotes and thoughts of several of the female farmers are a part of this editorial. Septuagenarian Jasbir Kaur, from Uttar Pradesh is quoted, talking about how for years and years, the contribution of women to farming has been undermined. It is simply dismissed as a duty they must perform towards their family and as a part of their household responsibilities. However, with the protest gaining momentum, the women farmers decided that they won’t sit back and let themselves get ignored once again.

When asked to return to their fields by cops, Kaur said, “Why should we go back? This is not just the men’s protest. We toil in the fields alongside the men. Who are we—if not farmers?”

While the protests are first and foremost about getting the Narendra Modi government to roll back the farm laws, it also seems, to some extent, from these women’s words, a fight to have their contribution recognised. And it is one they want to win, against gender stereotypes.

This isn’t the first time international attention has been drawn to the farmer protests in India. Previously, Rihanna and climate activist Greta Thunberg had tweeted about it, which then got blown into a massive outrage about interference in the country’s internal matters. Indian climate change activist Disha Ravi also was accused of editing a social media toolkit that was sent to Thunberg. Ravi is out on bail.