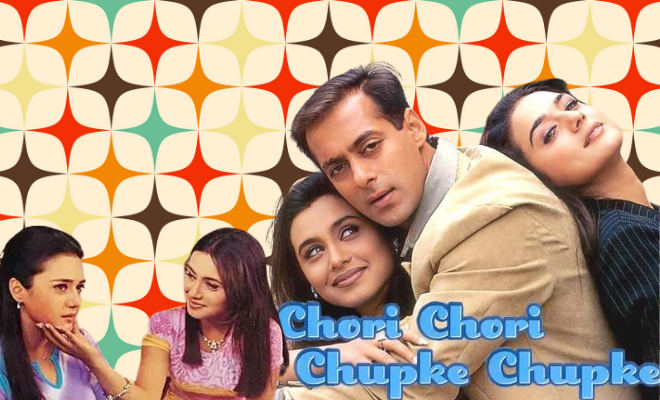 I have been revisiting a movie every Thursday for quite some time now and I have realised a couple of things. Firstly, Bollywood has been glorifying bullshit and giving it to us wrapped in shiny gold foil. And we have been accepting misogyny, sexism, shady sanskaars, and everything wrong, with open arms. We laugh while watching these movies. Another thing that I realised is that as a kid, my choice of movies was really questionable. So I watched Chori Chori Chupke Chupke when I was a kid. And even though I found Madhubala (Priety Zinta) quite cute and hilarious, I don’t think it is enough to salvage that movie.

There’s so much wrong with this film and on so many levels. Chori Chori Chupke Chupke revolves around a couple adhering to the weird-ass mindset their child-crazed, mental health-defying, and extremely pressurising family has. An Indian family who so badly wants a vaaris that they pressurise the young couple for a child and when the wife cannot make one, the couple is forced to take a baffling step. They welcome another woman in their relationship, just so they could have a child that’s Raj’s (Salman Khan) own blood. You know, because that’s what dadaji would want.

Now of course I remembered the main plot but the intricate details that set the foundation for the iron throne of misogyny to rest on were forgotten. A TV anchor is interviewing the dadaji and the entire fam joins in where they are introduced to the audience. The anchor asks what is the secret to having a happy family and guess what is it? Patriarchy apparently. As long as the men work and bring in the moolah and the women take care of the home, there can be no issues or so says the dadaji. Now I would not be making my life decisions based on the mindset of this guy. But Raj, oh dear, Raj.

I have grandparents too and I understand the generation gap has them doing things that are not right, not because they are bad but because they don’t know any better. But it doesn’t mean that we become the torch-bearers of orthodox mentality. Dadaji has created a good business, has seen his son get married who gave him a grandson – he seems to have had a content life. Now, since he is retired and old and all that, he wants his grandson to bring a baby into the house, and by baby I don’t mean a daughter. Dadaji has specified time and again that he wants a grandson. Okay, let’s throw tantrums – I want a Ferrari, so who’s getting me one?

Well, that is the reason foeticide is so prevalent in India. And it’s not solely movies like Chori Chori Chupke Chupke I am not saying Malhotra’s would do that but this son-favouring is the root cause of it. Now, since nobody decides to do an intervention, his craze knows no limit and he pushes Raj to get married. He gives in because it’s apparently what good Indian children do – give in to the demands of your elders.

The Malhotras have a rishta for Raj and they go to Priya’s (Rani Mukherjee) home to meet her, except he mistakes her bhabhi to be the potential bride. He thinks she is not a suitable bride because her cheeks are fat, she doesn’t know to cook and she is a gold medalist in Kabaddi. Like what even? Typical struggles of Indian matrimony nicely reflected in Chori Chori Chupke Chupke!

Anyway, Raj and Priya marry and in honeymoon itself, they make sure they get their baby-making machine running because crazy dadaji. Soon, Raj gets a call from their fam doc and he decides to surprise Priya with the news of her pregnancy. How can you surprise a woman with her own pregnancy? Dear men who wrote, produced, directed this film – women experience signs of pregnancy especially missed period. We also have this mind-blowing innovation called home pregnancy test kits, that we can use and find out without having to go to a doctor.

Anyway, unfortunately, Priya starts living life on the edge after she gets pregnant – tippy toe-ing, dancing, hanging from a curtain, jumping on tables, and trying to catch a six – while she is more than six months into it. I am not blaming her for the miscarriage but really, my heartbeats increased each time she did these things.

Priya loses fertility and what does an Indian family do? Not give two hoots about her mental health. The moment she returns from the hospital, crazy dadaji burdens her with his expectations of a great-grandchild within a year. That means, she will have to get pregnant again within the next three months. And how do we deal with grief? Everybody, including Priya, gets instructions to act as nothing happened. Funny thing is despite that, all they talk about is how they will have a baby soon (read son).

With all that craziness, the family pushes Priya to pimp out her husband for a child. She is like go hook up with someone, knock her up, and get us a baby because we need our own blood. Not like artificial insemination is a thing. Of course, Raj hires a prostitute to do the job. Please tell me if it would be okay if the husband told his wife to sleep with another man to get pregnant.

Anyway, Madhu is like adorable and super-duper cute. It’s funny though how Bollywood wanted to show a prostitute that dances in a bar wearing high neck tops, and has nobody touching her. She is just like dancing and not even in a seductive way because if she was shown like that – how would the Indian audience respect her, right? So to show that she was a little low on the moral ground, they focused on showing that she smokes, drinks, and uses foul language. Also, that poor girl is so uneducated that she doesn’t know basic math.

And must I point out how there was so much pregnancy in Chori Chori Chupke Chupke and yet the word isn’t mentioned. Everybody will just be like “maa banne waali ho”, “expecting mother” and Madhu calls it “matkaa” because it has to prostitute-y. Like why does it make everyone so uncomfortable? Pregnancy isn’t a difficult word to pronounce. Oh, wait. They will have to acknowledge that a woman had sex so we will just act like God just cut, copy, pasted a child in her womb. Nice, mature!

ALSO READ: Throwback Thursday: Kya Kehna’s Take On Pre-Marital Sex And Out Of Wedlock Pregnancy Is Relevant Even Today