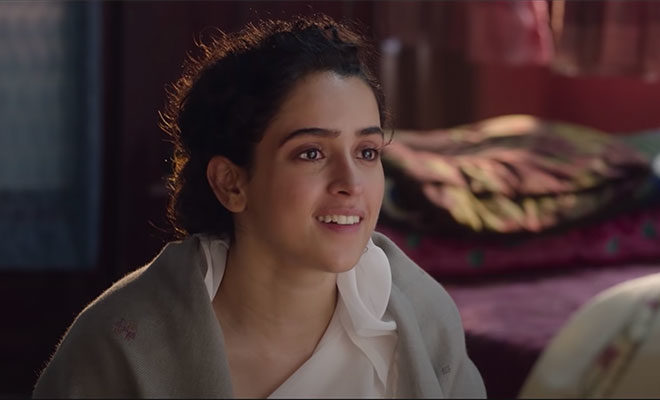 5 Thoughts We Had About The Pagglait Trailer: Here For Sanya Malhotra, Farting Dadi And ‘Crazy’ Wise Women!

At the start of this new year, we saw Seema Pahwa’s directorial debut, Ramprasad Ki Tehrvi, an understated, partly humorous yet emotion-evoking film that dealt with grief of losing a loved one. A little later, I watched the Oscar-nominated Pieces Of A Woman, which once again was about a woman’s grief of losing a newborn child, and how she struggled to process it on her own terms instead of how the people around her wanted her to. Both films were spectacular, not just in performances, but also in the way they handled such a delicate subject. And now, I am excited for the Sanya Malhotra starrer Pagglait, because the trailer of the Umesh Bist film promises to be another refreshing, hilarious and heartwarming take on how everyone deals with grief in their own way.

And how the society sets these certain standards for women to behave in the wake of a passing, without caring much for what she really is feeling. Pagglait, which is all set to release on Netflix later this month, also stars Ashutosh Rana, Sheeba Chaddha, Raghubir Yadav, Natasha Rastogi, Rajesh Tailang, Shruti Sharma, Jameel Khan, Meghna Malik, Ananya Khare, Yamini Singh, Bhupesh Pandya, Chetan Sharma, Aasif Khan, Nakul Roshan Sahdev, Ashlesha Thakur, Sachin Chaudhary and Saroj Singh, with special appearances by Sayani Gupta and Sharib Hashmi. It is produced by Ekta Kapoor and Shobha Kapoor’s Balaji Telefilms and Guneet Monga’s Sikhya Entertainment.

I’ve been genuinely excited for Pagglait, because I find Sanya Malhotra a delight to watch and the cast includes some of my all-time favourite actors like Raghubir Yadav, Sheeba Chaddha, Rajesh Tailang, Ashutosh Rana, Meghna Malik, Sayani Gupta and Sharib Hashmi. And of course, I’ve already gushed heavily about how much I dig the subject of the film. And the trailer has reinforced my belief that this is going to be another understated gem full of memorable dialogues and heartwarming moments, not to mention some pretty good performances and an interesting takeaway.

So without further ado, here are five thoughts I had while watching the Pagglait trailer!

1. Pagglait talks about grief, and how it is often overdone for show. God knows that needs deconstructing!

We’ve all spent a whole year watching media and every Tom, Dick and Jane deconstruct each other’s expressions, or the lack thereof, of grief—over the death of celebrities, over the loss of life in protests, over the pandemic. In a day and age where unless the grief is loud enough for the world to hear and devastating enough for the cameras to capture, it is not ‘proper’, we’ve all taken it upon ourselves to be custodians of other people’s emotions.

Mourning deaths is practically like putting up a show in our country, and the force flow of waterworks and decibel levels of crying are literally a competition. It’s either 13 days or a lifetime long, or nothing. But can’t grief be short and understated? I believe that’s what Pagglait will explore, and I am excited for it.

2. Pagglait also is a story about a woman’s awakening, and grief does seem to have a close connection with it, which I’m eager to see explored.

In the film, Sandhya is barely married to the deceased for a few months, and it clearly seems like an arranged marriage. Then, her lack of overwhelming emotion over the loss of a husband she barely knew doesn’t feel wrong to me. But we know how people think, don’t we? They’d expect her to do the whole ‘choodiyan todna’ and wailing widow routine by giving up food and all pleasures of life over the death of her husband. It’s not even something that’s a very small town mindset; we’ve seen enough of that in urban settings too, where the most practical of people want to uphold pretense, because society expects them to.

Just as women don’t have agency in other areas, they don’t have it in grieving either. They must do it as per society’s standards. Which is why when Sanya Malhotra’s Sandhya will break those norms and set herself free, that liberation is going to mean so much more than just a widow’s refusal to mourn her husband. I hope it makes a much wider statement.

Psst, I also have a theory about Sayani Gupta’s character and its connection to Sanya’s Sandhya. And if it is what I think it is, that’s going to be interesting to watch unfold too!

Also Read: Elizabeth Olsen, Kriti Sanon Were Trolled For Not Posting About Their Deceased Co-Stars. Is Grief Not Real If It’s Not Declared On Social Media?

3. Sanya Malhotra and the rest of the cast are masters in tackling such themes with understated brilliance and incredible comic timing!

I love this cast, full of actors we’ve seen pull off these kind of satirical dramas brilliantly with their impeccable comic timing. Who said a film about mourning cannot be funny? In Ramprasad Ki Tehrvi, it was the absolutely relatable characters, from quirky relatives to annoying guests, that managed to bring lightness to such an emotional subject, and I am ready to see this ensemble do it too!

4. Who is here for farting grannies ending a good trailer ? I am!

Farting Dadi FTW! You don’t just lighten the mood with your acting or dialogues. Sometimes all it takes is a well-written fart in the script and you can consider the pressure released! I usually have this complaint about Bollywood trailers just going all out and revealing every detail about the plot, thus making you lose interest in the film itself.

But I thought Pagglait got its trailer bang on, piquing my curiosity and excitement, not revealing anything more than necessary, and ending with a bang. Quite literally!

I mean, the FEELS! Ever since my a-woke-ning, I’ve been at constant loggerheads with my family, and most of our fights end with them thinking I’ve lost my mind because ‘modern feminist notions’ have corrupted it. So I totally relate to Sanya Malhotra’s concluding dialogue that women have their awakening from the deep slumber that society has forced them into for eons, they’re deemed heretics.

‘Heretic’ may have been a word to label men of science and philosophy and women deemed witches who dared to defy religious dogma. But the word ‘heretic’ comes from the Greek ‘hairetikos’ which means ‘able to choose’. And what’s more scarier for the society than a woman who can ‘choose’ for herself?