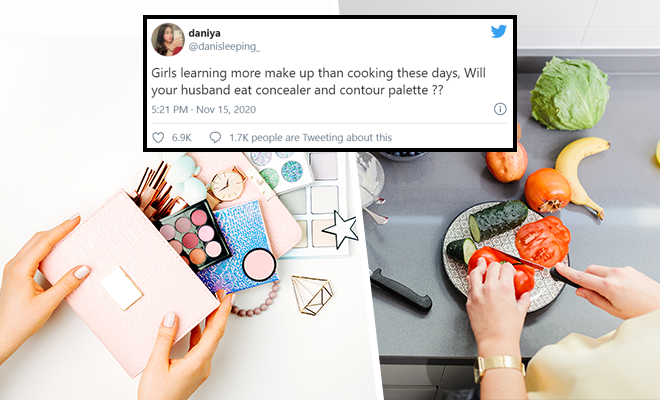 This Woman Thinks Instead of Makeup, Girls Should Be Acing Cooking Skills Because They Need To Feed Their Husbands. BRB, Face Palming!

For years, society has saddled us with predetermined gender roles and norms that insist that women make the home, cook and clean while men earn for the family. But what’s really sad is that even in the 21st century, people still hold on to these regressive notions and worse, judge others, especially women, for not adhering to them. Cooking, for example, has always been associated with the women of the house. However, it’s a survival skill that every grown up should know, regardless of their gender.

One such person who’s still probably living in the 1800s is this woman who expressed her concern about how women these days aren’t as invested in honing their cooking skills as they do in learning makeup. Her main worry was though, what these girls are going to feed their husbands? She took to twitter to share her thoughts and wrote, “Girls learning more make up than cooking these days, Will your husband eat concealer and contour palette ??” I don’t see the connection between makeup and cooking and why she felt the need to shame women who learn makeup while they could be cooking in the meantime. Do you? If you do, please enlighten me.

Girls learning more make up than cooking these days, Will your husband eat concealer and contour palette ??

I know, boils your blood, doesn’t it? Although the internet is a lot of things and mostly disappointing, this time it proved to be a place that was not going to take such regressive thoughts like hers. Twitter users were quick to school her on tweet that was problematic on various levels. A user wrote, “Im sorry you’re planning to slave away your life for a man Daniya. Its very sad that you measure your self worth by how your husband will treat you based on 1 kg of chicken. The rest of us value ourselves.” Another user pointed out makeup had nothing to do with cooking which is a self-sustaining skill that everyone should know.

She wrote, “hello, cooking is a self sustaining skill that all people, regardless of their sex or gender should be well versed in. make up has no relation to how you cook. in fact, most people who are good at makeup actually have amazing cooking skills because they can do measurements better.” She further added, “And a lot of people love makeup, its catharsis for them, a hobby, often a career. we’ve confined women to the kitchen for so long that it’s hindered their relationship with their personal being. makeup allows a lot of women to reclaim that. so shaming them for it will never work.”

A user also wrote, “Lol how bout he cook ?? I’m so confused why y’all women keep accepting gender roles based on when men went to work/war while women didn’t have RIGHTS and stayed home as a housekeeper lol. You both work, you both cook. Period. Tf lol.”

Lol how bout he cook ?? I’m so confused why y’all women keep accepting gender roles based on when men went to work/war while women didn’t have RIGHTS and stayed home as a housekeeper lol. You both work, you both cook. Period. Tf lol

Women aren’t entitled to feed their husbands just like men are not entitled to earn for us. It’s high time we get past these gender stereotypes and leave it to people what they choose to do with their lives. Also, can we seriously stop with shaming women, or even men for that matter, for liking and learning makeup? We are in 2020, for god’s sake!

Also Read: Twitter Schooled Rujuta Diwaker After She Slammed An Eve Teaser By Saying “You Are Not Shahrukh Khan.” Erm, Is It Okay If A Film Star Molests Women?