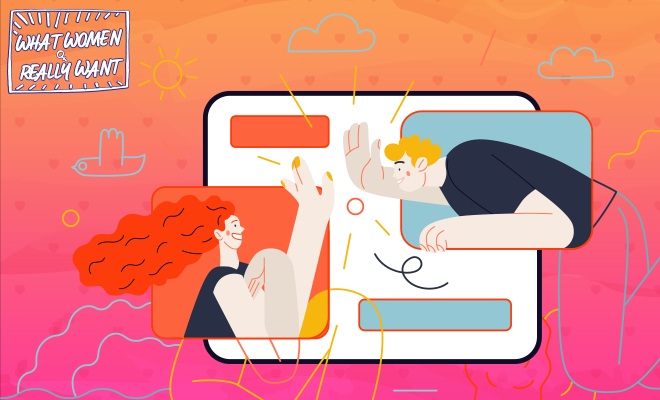 You know International Women’s Day is around the corner when the day after Valentine’s Day, brands begin shooting out emailers and ad campaigns sprayed with eau de feminism, to tell women that they are amazing, flaws et al. Does it matter that right before, they were preying on women’s insecurities to sell their products, and right after, will go back to it? Hahahaha no. Similarly, men feel like that one day of being nice to women, respecting them, and making them feel extra special is enough effort to celebrate women. Ah, sir, but what about how you’re a misogynistic prick to them the rest of the year? Tumhare ek din ke ‘token female ally’ ka achaar daalenge? (Which is also something the women will only have to do because men doing household chores is a limited-period offer folks)

Look here, guys. All these topical days like Men’s Day, Independence Day, International Day of Justice, Women’s Day… these are not like your birthdays or anniversaries. It’s not supposed to be just that one day to make a designated person feel special. To be really honest, it’s not even about making anyone feel special. No, these days are more symbolisms for the greater purpose, like a reminder that this is a cause worth paying attention to.

It is sad that the well-being of half the planet’s human population is “a cause that needs to be paid attention to”. But here we are. International Women’s Day, where every year, everyone from the United Nations Woman to Influencer Shanaya from SoBo will come up with themes, campaigns, activities, and slogans for the cause. But yeh toh sab social media waali baatein hain!

What do women really want from men on Women’s Day? A one-day special offer till stocks last or a lifelong commitment to a greater purpose? I normally don’t condone speaking for other people, but since I am a woman, and this be my day fellas, I’ve got a general idea of what women want from men—the be female allies.

To say that a man be unequivocally feminist is perhaps an unrealistic expectation. What men can be, though, is female allies. But being a female ally isn’t like a cosplay you can do for some time and then take it off like we women take off makeup, putting it back on when we want to. No sir, this is a much larger commitment to a cause that is so important, it could be the difference between life and death, survival and extinction of the human species on this planet. Because really, where do you think you’re heading without our support, dear men? Toward destruction, that’s where.

Now this road ain’t easy. Feminist allies are often targeted, bullied, mocked, considered ‘soft’ by those who stand by those age-old notions of masculinity and femininity. It is not easy to stand up to years and years of patriarchal conditioning, and one’s own family, friends and coworkers, who are also party to this misogyny. But if the pay off is a better world with a better future, then you gotta, right?

So here are 5 ways that men can try and become allies for women, starting on International Women’s Day but continuing for the rest of their lives. Maybe even after that, if they pass on these learnings and behaviours to the younger generation.

But first, let’s begin by understanding what a feminist ally/female ally/male ally is.

The Harvard Business Review defines male allies as “members of an advantaged group committed to building relationships with women, expressing as little sexism in their own behavior as possible, understanding the social privilege conferred by their gender, and demonstrating active efforts to address gender inequities at work and in society.”

That definition in itself tells you all you need to know about being a true ally to women. But I understand, it might need more elaborating, so here goes.

1. LISTEN to what women have to say, instead of mansplaining.

All those jokes about it being difficult to understand women ignore one paramount reality—men don’t listen to women. So how do they expect to understand us, eh? So listen to us women, and that’s really have the job done. We’re dying to tell you all the ways in which we feel oppressed, undermined, belittled, gaslighted and mansplained. We’ll tell you in whatever language you can understand it in, but you’ve got to listen.

Don’t assume you know everything about women. And when a woman tells you you’ve got it wrong, again, listen to her point. She knows womanhood and its struggles better than you. Sorry bud, but it’s a chromosome thing.

2. Check your privilege, and educate yourself before you dismiss a woman’s point.

Some men listen, oh they listen so patiently that you’d think they’re really on your side! But then they try to tell you that your experiences are invalid, or that you’re an exception, or that they’ve never experienced this so what you say must not be true. And that’s where you need to write a big fat check to your privilege, and withdraw all of it. Men have lived such sheltered lives that they do not know what being a woman is really like. You can be a female ally but still not know the entire extent of women’s problems because different women have different problems, and your understanding is only limited to what you get from the women you’ve engaged with.

So read feminist literature. Listen to feminist leaders, especially those advocating for women from minority groups. Follow thought leaders on social media. Understand why mentioning ‘Dalit’ when talking about crimes against Dalit women or saying ‘A man raped a woman’ instead of saying ‘A woman was raped by a man’ makes a whole world of a difference.

3. Call out problematic behaviour, and make sure your ‘allyship’ isn’t a one-time thing.

Being a feminist ally is to also be a vocal, because silence is what fosters oppression in the first place. Women are tired of being silent, and are literally dying to get their voice heard. And unfortunately, there are still places where women’s voices fall on deaf ears. And that’s where you come in. Because thanks to your male privilege, your voice is like chocolate to everyone’s ears. So this is the place where you use it well.

Call out your fathers, brothers, uncles, friends, coworkers or even roadside strangers who are hurting women, oppressing them or doing wrong by them. That’s how you make the world a better place. Being an ally must also extend to people beyond you. So make sure you impart this wisdom to other men, and younger minds that you can influence.

4. Don’t expect to be put on a pedestal for practicing basic equality.

There’s something called as a ‘Pedestal Effect’ which we are all guilty of indulging in. We applaud men for the smallest acts of gender equality, especially on occasions like Women’s Day. “Oh, they participated in this beautiful video with empowering messages on placards!” “Oh, they ‘let’ their wives work!” “Oh they cook the meals at home!” “Oh he listens to his wife and remembers every little thing!” “Oh, he took a paternity leave!”

Erm, these are basic things that human beings ought to do for each other. Isme taali kyun bajaaun?

Understand that doing these things will not earn you pats on your back or make you our hero. We’ve carrying this weight on our backs for years. For you to step in shoulder it this late is not something worth celebrating. Yes, we are glad you’re finally doing it. But no, you won’t be getting a gold star for your homework that you’ve submitted late. It’s just something you’ve gotta do.

5. Remember, this isn’t about you.

And then comes the “I feel your pain, but #NotAllMen are trash” argument. Sigh. Repeat Steps 1-4.

Really, the focus is not on you here, men. In that one statement, we are summarising and protesting years and years of oppression and mistreatment, sexual violence and lack of respect. So don’t get offended or defensive and start launching into a tirade about how you are not like these other men. Don’t tag us women in news stories about men being hurt by women to show us that women can also be oppressors.

Yes, we know. Duh. We wrote the book on being oppressed.

But right now, right this very moment, your kind, men, are dominating. You have the upper hand. Yours is the foot on our heads, and we want that pressure released first. Let us women rise up, breathe and then we can hold everyone accountable, equally.

So, men, we hope this was a great class? When do you begin listening?