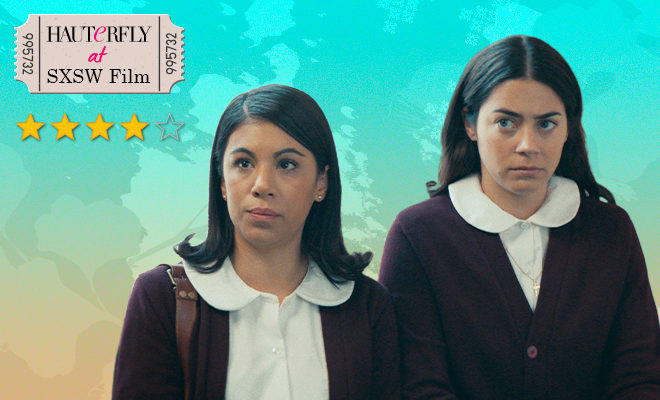 The title Women Is Losers, when I first saw it on the SXSW Film Festival line up, put a smile on my face. I knew the Janis Joplin song due to an old friend having made me listen to it. And the faint memory of its lyrics pointed me in the general direction of what Lissette Feliciano’s feature debut would be about. And hey, I was on board. Feliciano is also the producer and screenwriter of this film, which is set in San Francisco in the time period of 1960s to early 1970s, a pre-Roe v Wade era when abortion was still criminalised. A promising Catholic teenage girl gets pregnant and has to build a life for herself by challenging the society’s norms of the time.

Women Is Losers. But how and why?

Celina Guerrera (Lorenza Izzo) is a 17-year-old living in a difficult house with an abusive father (Steven Bauer) and helpless mother (Alejandra Miranda), in 1960s San Francisco. She’s good at math, follows the rules mostly and lets her best friend Martina ‘Marty’ Guzman (Chrissie Fit) do most of the rule-breaking. However, when her boyfriend Mateo (Bryan Craig )returns from the Vietnam War, a minor indiscretion results in Celina getting pregnant.

After losing Marty to a botched unsafe abortion, Celina has no option but to give birth and raise her son, with no help from Mateo. Being from a marginalised community and having not finished her education, Celina struggles hard to earn and put away for her son’s future. Eventually she catches the eye of her superior, Gilbert Li (Simu Liu), who promotes her from typist to teller at the bank and teaches her the ways of the Chinese and how they became indispensable to America. A fast learner, Celina learns to work hard, save, and invest. But when she spurns Gilbert’s true intentions for her and marries Mateo, she loses a chance at the future she always dreamed of.

The film chronicles Celina’s struggles, set against the backdrop of time where marginalisation was rampant, and who was more marginalised than women, who couldn’t do anything, not even own or rent a house, without a male relative’s assistance. And yet, in her own little ways, she manages to set precedents that were rare for women in that time.

How the movie opens throws you off your expectations so well! We’re in the middle of an intense fight between Celina, Mateo and their childhood friend Lois, who Mateo has been sleeping with. All characters break the fourth wall, telling us how most stories of the 60s focus more on the glamorous perfect American woman than on common working women like Celina who were struggling even to be recognised as Americans.

Next, Mateo, Celina and Luis ask us, the audience, to excuse them for being resourceful with what they have, not dress up the street, and not having the most perfect lighting in their film because well, tight budget. The film is all about making do with what the cast and crew had, which is both, a smart way of inserting a disclaimer about any production issues you might’ve had as well as a nod to the film’s theme.

Because isn’t it kind of what women have done for years and years? Been resourceful, made do with what they’ve gotten, stretched the last penny to get the most out of it, and just hustled to earn basic rights?

Through Celina’s story, director and writer Lissette Feliciano showcases how Celina makes do, at every single crossroads of her life, with what she has. Abusive father and strict parents not letting her go out at night? She’ll sneak out and find a way to do what she wants. Gets pregnant and can’t get an abortion? She’ll raise it herself. Her father asks for more money to sustain the expenses? She takes up two jobs and eats boiled eggs for lunch so she can save money. Like most women in a socio-economic condition like her’s, Celina is smart and a fast learner. The only time she does falter is because of her emotions, which we know happens to us women a lot.

Through its characters, Women Is Losers manages to represent the struggles of women, particularly how it is worse for those from marginalised communities

The different kinds of men Celina encounters in her life are also symbolic of the larger type. Abusive father with regrets but unable to stop. A cowardly husband who cannot let go of his male ego. A businessman who seeks advantage in every thing he does, including what he can get from a woman, And finally a man she can count on as an ally, because he too belongs to a marginalised section of the society.

We see a similar range in the female characters too. Celina’s mother is submissive but her silent caretaker. Marty, her bold friend is a fierce supporter who burns so bright that she burns out faster. There’s Lois, the glamorous popular girl with only her looks working for her. And then there’s Minerva who is your typical career woman, hostile only because she works in an environment which pits woman against woman, but an eventual ally.

The film also shines a light on the specific troubles of marginalised communities, particularly when it comes to completing their education and scoring a well-paying job that lets them raise their standard of living. Most of them are unable to finish their education, either like Celina, because of social situations creating an environment where it is not feasible. Or because of financial situations. And this eventually hampers their job search, and earning, which is the only way they can escape their otherwise sealed fate.

It’s also, although just passingly, a sort of look at how historically women have always had it worse than men

Women Is Losers isn’t just an ode to women’s resilience but also a historical recounting of how women rarely seem to catch a break and have it so much harder than men.

For example, it was so easy for Gilbert to remove Celina from her job, which definitely set her back on her longterm goals and caused problems in her married life. And he seemed to get away with an apology in the end. Matteo got to say an emotional apology and return to his son’s life, despite everything that he did.

Men don’t just get everything easily, they get off easily as well after doing the wrong things. And women are the one ultimately fighting a losing battle because nobody lets them make an informed choice and their biology is forever rigging the game against them.

The film concludes with the landmark Roe vs Wade verdict that decriminalised abortion being passed. And it ties it all up in such a poignant and euphoric moment that you can’t help but break out in a cry of sadness and joy, just like Celina does as she thinks of Marty.

A few things that I wish were different….

I am a fan of the whole Fleabag-esque Fourth Wall breaking, as long as it is done well and serves a substantial purpose. Here, I found it to be organic and effective, and bringing a certain lighthearted break to serious scenes. Now being a dramedy, I get that it is trying to balance the humour and the drama. However, that that tonal promiscuity could throw it off sometimes.

I also wish we could’ve gotten a little more of the historical backdrop to make this a proper recounting of women’s history. I’ve realised that not a lot of films and series can pull this off, so I do give this one efforts for trying.

But all that doesn’t end up mattering much because emotionally, the film has got you and the performances outweigh the rest. Lorenza Izzo is brilliant and earnest, bringing out the softness and innocence as well as the determinedness of Celina beautifully. I think Steven Bauer and Simu Liu were pretty great too. I would also like to petition to make Liza Weil the mandatory ally for every female protagonist—from Rory in Gilmore Girls to Midge Maisel in Marvelous Mrs Maisel, she is such a good friend who comes across has offhandish but eventually you find out is such a true friend.

Verdict: Women Is Losers is a winner here!

At several points in the film, but none more than when Mateo does something so stupid and when the final scene with the radio happens, I wanted to scream and shout and hit something and hug someone and cheer loudly and cry because, aye dios mío, aren’t women just amazing?

My takeaway from Women Is Losers is, first, that it is a film I very much loved and enjoyed. And second, not that women are ultimately winners. That would be too rosy a picture to paint, and this isn’t a fairy tale. The film to me is one of the million stories of women who have persisted, and persevered and made do with what life has thrown at them, which should serve as a heartfelt appeal for gender equality. We’ve been losers for far too long. You gotta give us the chance, the opportunity, a level playing field for us to show you what we are capable of.

But you know us women. You’ll be off searching for gold, and we’ll figure out a way to turn the dirt into the home of our dreams!