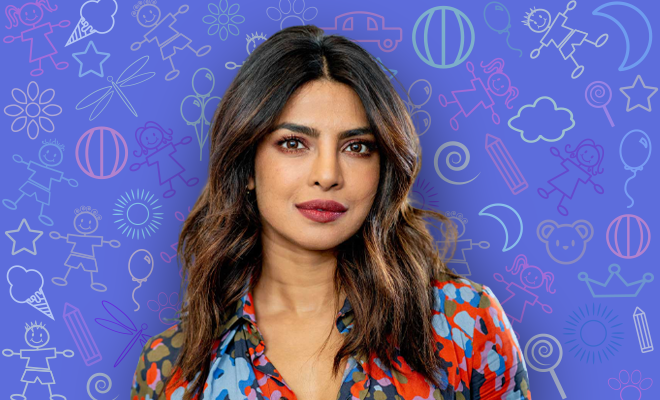 Indian media can sometimes be very much like your unfriendly neighbourhood auntie. You know, the one that wants to dog your every move, constantly dissect your every action and want to know when you’ll be making important life decisions like marriage and having kids. Yes, those are the only two that matter if you are a woman. Anyhoo, since the likes of Anushka Sharma and Kareena Kapoor Khan are becoming mommies, how could Priyanka Chopra Jonas, who has completed two years of marriage with Nick Jonas, not be asked the ‘When are you having babies’ question?

The White Tiger actor, who also owns a production house, Purple Pebble Pictures, which is producing some pretty good content, married Nick Jonas in a lavish multi-faith ceremony at the Umaid Bhavan Place in Jodhpur in 2018. Recently, in an interview with Sunday Times, she opened up about being married to the Jonas Brothers crooner, the 10-year age gap between them that constantly gets talked about, and of course, her plans to start a family.

Speaking about the age and cultural difference between her and Nick Jonas, she said that none of it mattered much. “Nick took to India like a fish to water. But just like a normal couple, you have to understand each other’s habits and what each other likes. So it’s more of an adventure than trying to figure out hurdles. None of it was really that hard.”

She added that she clearly living her best life possible because Nick was the perfect partner who is always in her corner.

“It’s so comforting to find a person who is in your corner. Whatever I may be in my professional life or how the world perceives me, I’m just a girl trying to live her life in the best way possible, and I’m so grateful to have a partner in doing that.”

And indeed, we can see that. Nick Jonas has enjoyed every desi custom we threw at him! If you follow Nick Jonas on Instagram you know that Bollywood dance numbers have totally become his thing. They’re part of his playlist that he puts on right before he goes to stage on tour. Remember that video of him head banging to First Class? And when the Jonas Brothers and their wives, PeeCee, Sophie Turner and Danielle Jonas were on that yacht with their friends and suddenly a Bollywood song began playing?

What’s more, he is Priyanka’s biggest cheerleader, because he’s already seen The White Tiger and posted about it on his Instagram stories and Snapchat!

Also Read: 5 Thoughts I Had While Watching The White Tiger Trailer. Love Priyanka Chopra, The Actor, But She’s Doing Brilliant As A Producer Too

So when does this gorgeous couple plan on starting their family? Joe Jonas and Sophie Turner recently welcomed a baby girl, named Willa. So all eyes are now on Nick and PeeCee. Well, cool your jets, fans, or maybe get excited because Priyanka Chopra is keen on having babies and lots of them!

“I do want children, as many as I can have. A cricket team? I’m not so sure!”