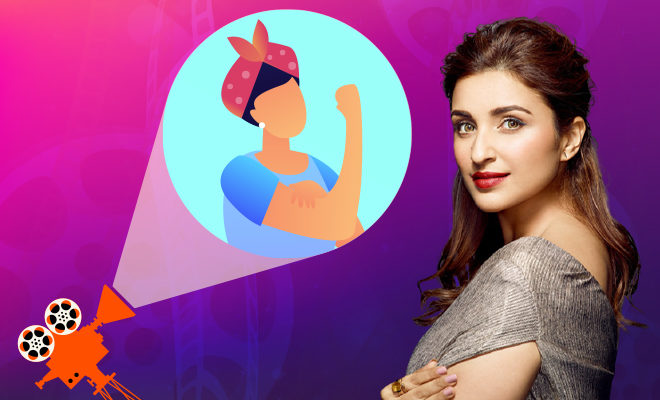 Parineeti Chopra Says Actresses Have To Change The Narrative Of How Women Are Portrayed On Screen. Hear Hear!

I might sound like a broken record at this point, but I just love the smell of freshly brewed content that tells the stories of real, imperfect women. OTT has literally laid down a feast for us to pick from. And Bollywood is also slowly realising that it needs to change up its recipe and ingredients when it comes to portrayal of women on screen. Because no one wants takeaways of the stale sexist crap they were serving until some years ago. What’s more encouraging is that a lot of mainstream actors, particularly the younger lot, are also opening up to these roles that are not your quintessential sex symbols or goody-two-shoes. And one such actor is Saina actor Parineeti Chopra.

Ina recent interview, she talked about the portrayal of women in Indian films and how some of the onus now is also on the actresses to fight the stereotyping and sexism. Parineeti said: “I strongly feel that actresses have to change the narrative of how women are portrayed on screen. Right from my debut, I have tried to do this. I have always taken it on myself to do something out of the ordinary, not portray the quintessential heroine that Bollywood has tried to depict for ages.”

What she says echoes something her The Girl On The Train costar Kirti Kulhari had also mentioned about not saying yes to the same kind of roles, even if it means you’re upsetting some people in the process.

I enjoyed Parineeti’s debut in Ishaqzaade alongside Arjun Kapoor, but for me, she made a much bigger impression as the bindaas Punjabi girl Dimple in Ladies Vs Ricky Bahl. Since I am obsessed with Ranveer Singh, Pari catching my attention with her performance is quite the testament to her talent. She has gone on to do that in films like Hasee Toh Phasee and Meri Pyaari Bindu, both films having had her play atypical roles. These movies might not have been big hits on the box office, but they do have a loyal fan following.

I do wish that Pari got some better scripts to play around with, like she did with Sandeep Our Pinky Faraar recently, because she definitely is an actor with potential. What’s more, she is picking female characters that are trying to do something different every time.

Also Read: The Girl On the Train Review: Parineeti Chopra Film Makes A Sincere Effort To Thrill, But Expectedly Derails

“My last three films—The Girl On The Train, Sandeep Aur Pinky Faraar, and Saina—were also an attempt by me to give varied, bold, confident, ambitious heroines to audiences. My next film choices will resonate this thought process too because I definitely want to do my bit to portray women better,” Parineeti assured.

I do have high hopes from this one! Here’s to more actresses stepping out of the sexist comfort zone that Indian films have built for them and soaring high, at the box office and in audience’s hearts!