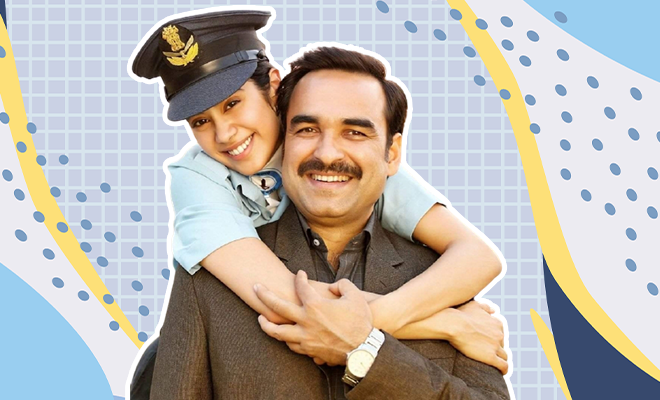 Bollywood has seen an influx of women-centric content lately. You can credit the freedom from BO numbers that comes with the arrival of OTT for it. Or you can appreciate what social media activism has done to boost awareness and make the audience eager for real stories of real women. One of the biggest tropes that we see rise with this trend in entertainment is the ‘female ally’. A man who not only understands women and their struggles, but he does everything in his power to enable the women in his life to do what they want to do, be who they want to be. One of the actors who recently stepped into a female ally role is Pankaj Tripathi. He played Flight Lieutenant Gunjan Saxena’s father in the biopic, Gunjan Saxena: The Kargil Girl, on Netflix. And his character managed to make several impactful points on gender equality.

I could go on and on about all the ways in which his character in the movie, a progressive papa, empowered, enabled and supported his daughter to soar higher than any other woman ever had. What impressed me the most, though, was how he did it by keeping the peace at home, without antagonising the other family members or the society, and by peppering it with teaching moments for his son and wife.

Also Read: From ‘Thappad’ To ‘Gunjan Saxena’, Bollywood’s Progressive Papas Are Showing Us How To Raise Strong Women

It must be noted that Pankaj Tripathi’s character doesn’t try to change the world or the people around him and how they think of women’s and their capabilities. Instead, he focuses on making the change in his own home, and hoping that the results would be set an example that the rest of the society could follow on their own. And that is such an effective approach to usher in gender equality, isn’t it? You think macro, but you do micro.

Right now, the way the world has suddenly regressed into treating one half of its human population as shit, setting things back on track feels like a Herculean task. How do we make the change on a global level? The sheer magnitude of the problem dwarfs anything solution that we can think of. Movements like #MeToo and #TimesUp came. Outrage after what happened to Nirbhaya shook us to the core. We were shocked to see the percentages of gender-based crimes in other parts of the world, even first-world countries that prided itself on their education and safety for women. If nothing could make the change, what would?

The answer lies in the simple proposition—Think global, act local. Much like charity, sustainability, cleanliness or any other social movement, even gender equality begins at home. And to take a step further with accountability, it begins with the fathers.

October 11, Sunday, was International Day of the Girl Child. A rather important day on paper, but treated rather theoretically in practice. I mean, we could list all the numerous policies and incentives in place to further a girl child’s life, right from facilitating her safe birth to safeguarding her share of opportunities when she grows up and wants to be her own person. But how would any of it help if in her own home itself, the girl child is not accorded the respect and dignity that she is owed? What good is it if her own family treats her subserviently because of her gender?

In an interview on this very important day, on-screen female ally Pankaj Tripathi channelled his character and spoke about the difference that fathers can make in raising sons and daughters as equals, if they lead by example. And a huge chunk of that lies in parents understanding and spotting instances of reflexive gender bias in their actions. Let’s call a spade, a spade. Our parents’ generation has ingrained patriarchy to such an extent, that they wouldn’t think twice before acting out a gender bias. It doesn’t mean that they love their son more than they love their daughter. But when it comes to household chores or displaying maturity, it’s always, rather reflexively, expected of the girl child.

But as the Mirzapur actor says, what’s important is that the parent realise their mistake and make amends for it. That is how we can work towards gender equality in our homes, to begin with.

Isn’t it refreshing to hear about a parent who is ready to apologise to their child and admit they’re wrong? We’ve often seen in our Indian culture, IRL and in our movies and television shows too, how difficult parents find it to profess their mistake. Remember in K3G, when Amitabh Bachchan’s character is almost on the verge of losing it all before he realises that he needs to set his ego aside and hug his damn son! Now think about it in the context of Indian fathers, raised on a steady staple diet of patriarchy,  having to apologise to their daughters for everyday conscious and subconscious sexism. That wouldn’t be an easy one, would it?

The father-daughter relationship has always been described as heavy on emotion. And yet, we find that fathers are often responsible for squashing their daughter’s hopes and dreams, all for the sake of frivolous things like prestige, honour, reputation, and family traditions. Some do it willingly; some do it with a heavy heart. But fathers, being the heads of families, are usually the ones taking the decisions about how their daughter’s life would go.

It is here where entertainment comes into the picture, with characters like Pankaj Tripathi’s in Gunjan Saxena or Kumud Mishra’s in Thappad, that can guide fathers on how to raise their daughters, how to apologise to one’s children, and how to be their support systems. The fact that we’ve got more women-centric content, such as films like Panga with characters like Jassie Gill’s Prashant who plays dad to Yagya Bhasin’s Adi, also pronounces hope for how fathers can teach their sons from an early age to respect women’s contributions and capabilities. We need more such fathers, who can try to initiate change in their small eco-system. And then, even goodness can, like viruses or joy, become infectious and spread from one family to another. Pankaj Tripathi, who along with wife Mridula Tripathi, raises a teenage daughter, is an advocate for a democratic style of parenting. Which means, as parents, they both offer advice and guidance to their daughter but leave it up to her to make the decisions about her life. For an Indian parent, who is the poster child for helicopter parenting, that’s one scary thought. But the Sacred Games actor believes it works better, because there’s trust and freedom here. And with that great power comes great responsibility which ensures that children often follow their conscience when making life choices.

“I always tell my daughter that we can only guide you from our experience. The day you become an adult, you will explore the world and live your life on your own terms. I can only give her guidance; it is upto her to accept it or reject it. Agar aap unhe freedom dete hain aur ek democratic mahaul dete hain, toh voh kuch gadbad kaam nahi karengi.”

It’s hard to make any drastic changes to the existing societal norms over night. So for argument’s sake, let’s agree that fathers as the heads of the household is a concept that isn’t going anywhere soon. Which is why, fathers play such an important role in the change we are trying to bring about in women’s conditions. Especially in our obsessively patriarchal motherland (what a paradox, amirite?). Exposing the current generation of parents to entertainment and information that can change their mindsets on an atomic level is one way of going about it. I’ve found that my own parents seem to understand my motivations better when they read my opinions, or watch the same movies and shows that I do. It’s not a foolproof a-woke-ning. But at least, that’s some progress, right?

Difficult as it might be, this progress is imperative. What’s more is that it’s doable. I’m not undermining the problems of those who come from troubled families. But in a generic sort of an estimate, this is a doable task. It is a way of bringing about change while not feeling too overburdened by the weight of effecting a global change. You sow the seeds of gender equality in your own home. And the tree that thus grows, will branch out and grow strong in a few years, and finally bear fruit. And if everyone plants one in their homes, pretty soon, we could cover the entire planet, no?

Also Read: Michelle Obama Says She Felt The ‘Sting Of Gender Roles’ Post Childbirth And How It Changed The Equation Between The Couple