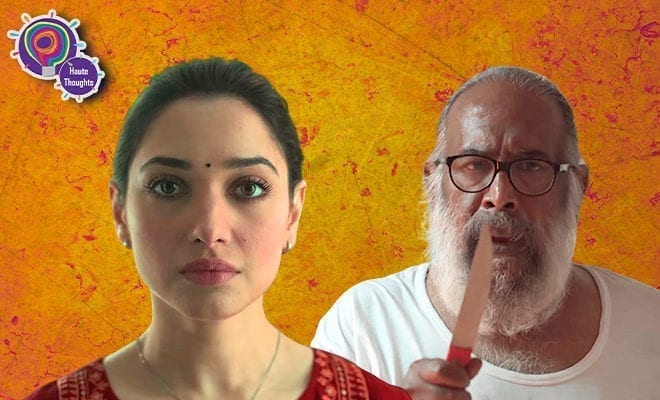 My father has taken to OTT like fish to water. He binge watches more than my brother and I do, gobbling entire shows within days. Which means I have to constantly be on the lookout for new movies and shows in the action-thriller genre space because he’s pretty much like an insatiable baby who throws a tantrum when there are no ‘interesting’ things to watch! And that’s how the trailer for November Story caught my eye. The new Tamil web series presented by Disney+ Hotstar VIP marks Tamannaah Bhatia’s second stint on OTT shows, and is a murder mystery, also starring Pasupathy, GM Kumar, Aruldass and Vivek Prasanna, amongst others. It is directed by Ram Subramanian and produced by Ananda Vikatan Group.

Tamannaah plays an ethical hacker named Anuradha in this suspense thriller. Her father, Ganesan, is an acclaimed crime mystery novelist who has begun suffering from Alzheimer’s. He finds himself smack in the middle of a murder investigation, and soon becomes a suspect. Of course, all clues point towards him, but we all know, whodunnits are rarely this simple. Over the course of seven episodes, the series will unravel the mystery as Anuradha tries to prove her father’s innocence. The web series will feature plenty of flashbacks across multiple timelines as it slowly reveals who the murderer is.

Speaking about November Story and her character, Anuradha, Tamannaah said, “Anuradha is a young, independent, fearless and intelligent woman who takes it upon herself to save her father from being punished for a cold-blooded murder. Portraying such a strong female character who is the hero of the story was one of the most gratifying experiences in my career so far. With its compelling storyline and unique narrative, November Story will keep audiences on the edge of their seats and hooked till the end as the mystery around the murder is uncovered.”

Also Read: Tamannaah Bhatia Was Trolled For Gaining Weight While Being COVID+. We’re Judging People When They Are Sick Also?

Director Ram Subramanian also spoke about the show’s unique theme and how its appeal scales since it is being released in Tamil, Telugu and Hindi. ““November Story is a classic murder mystery where the quest to find the truth behind the crime unveils a series of hidden truths. All the actors have delivered extraordinary performances and I am confident that the unique theme and genre of the series will grab the attention of audiences.”

The trailer, which I saw both in the original Tamil and even in Hindi, definitely looks interesting. Two things in particular intrigued me. One, of course, was the fact that the victim was stabbed 46 times with a knife, but then also punctured again with a pen, which appears to have been used post-mortem. This could be lending gravity to the suspicious that Ganesan, the writer, is the killer. The other thing is the act of drenching the victim’s body in white paint, which as the cop points out in the trailer, was done to perhaps tamper with DNA evidence. That’s quite inventive, and once again, lays the blame on someone who has a deep understanding of the forensic procedures. Maybe a crime novelist? As a writer who loves the genre too much, I’m excited to watch it myself!