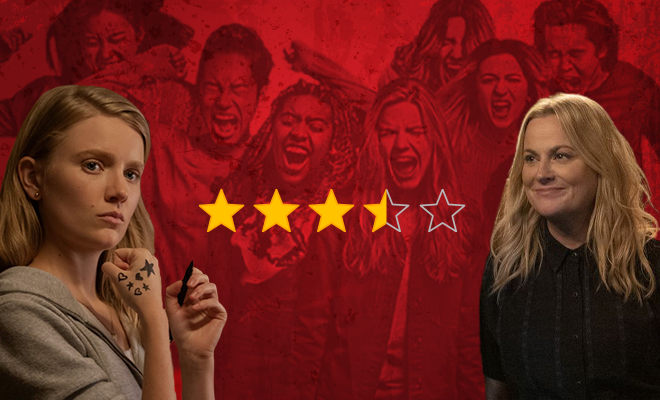 I’d learnt early on in my ‘watching’ career (yep, its a thing) that if Amy Poehler (and/or Tina Fey) makes a film or a show or even hosts one, you can’t miss it. So natutally, Moxie had me excited because it isn’t just a film directed and produced by Poehler, it’s a film that chronicles the rise of a feminist revolution against sexism in an American high school… through a zine that fosters strong female friendships. Releasing on the weekend before Women’s Day. The feminist, writer, and Mean Girls fan in me was like a child on Christmas morning, with loads of expectations from the gift under my tree, or in this case on my Netflix. And let me put it out there, I actually think Moxie is a hugely relevant film that everyone needs to watch. I just can’t help shake the feeling that the film could’ve had a little more of its titular spirit in its storytelling too.

Moxie is, believe it or not, the name of a sugary soft drink launched by the Coca Cola company, back in 1986. Their advertisement targeted young people, claiming that drinking moxie would help them build up courage and nerve, and minor setbacks won’t matter anymore. That’s what it means when you say, “Oh, she’s got Moxie!”

In Moxie, the film, 16-year-old Vivian hears this rather dated phrase during a pep rally in her school, when Principal Shelly tries to hype up the boys’ football team. Vivian doesn’t agree, because she has seen how the team captain and most popular (and naturally, good looking) student, Mitchell, harasses and mansplain the new girl in their school, Lucy. Initially, Vivian was down with the status quo of her high school, and dreamt of escaping soon to Berkeley with her BFF Claudia. However, something compelled her to open her eyes and notice that her high school’s problem wasn’t cliques, it was blatant, rampant and toxic sexism.

Inspired by her mother’s rebellious past and the lyrics to Bikini Kill’s ‘Rebel Girl’, Vivian decides to start an anonymous zine, called ‘Moxie’, lighting the spark that fuels a school-wide feminist revolution.

Does Moxie have moxie? Oh yes, it does!

First of all, I dig the name, like a lot. I’ve always wanted to start a zine of my own, and maybe when I decide to, I’mma call ya guys.

Moxie is definitely capable of getting you all charged up to lead your own feminist revolution. It gets there by employing all of the clichés and tropes that you’d think possible. Rousing speeches? Check? Girls breaking cliques to come together? Check. A schoolteacher who is not on their side at first but eventually becomes an ally? Check? One jock who is a douchebag and one nerd who suddenly got hot but doesn’t know it, and is in love with our heroine since childhood? CHECK. But you get over most of them, because the film finds a way to subvert them and make them feel sincere. It doesn’t always succeed, but the effort counts.

The film does a decent job of presenting a spectrum instead of a binary ‘You are a feminist or you are a misogynist’ outlook. There’s someone like Lucy, who is already awakened and just waiting to jump on the revolution bandwagon. There’s Vivian, who is a new initiate, full of enthusiasm and hope that what she does will yield instant results. There’s girls from the soccer team who are pretty much like jocks—chill, but ready to rally to a cause if shown one. Or cheerleaders like Emma who join the fray because something happens or happened to them. And then there’s Claudia too, who realises that she can’t just take the plunge like her privileged, white friend can, but has to test the waters and swim slowly.

Moxie understands that feminism isn’t just about women, but about equality and in that it can extend to men too, as well as issues of race and economic status. Mitchell’s privilege isn’t just that he is a man, it’s that he is a white man. And Seth is perhaps a female ally because he grew up with sisters, or because he knows what being marginalised feels like.

I think this young cast is pretty good, and the older one, (which includes Ike Barinholtz who is a favourite from The Mindy Project) does a pretty good job. But I have to make a special mention for Patrick Schwarzenegger, who made me hate his character Mitchell so much, it was clearly a role well played!

A huge shoutout to artist Nina Charuza, who has designed the Moxie zines in the film. The zines, coupled with the punk rock Bikini Kill and Linda Lindas music, really helped imagine a vivid idea of what the Riot Grrl movement from back in the early 90s would’ve been like. Now I don’t have much information, but it sure made me think of Kat Stratford from 10 Things I Hate About You.

And that’s another fun thing about Moxie. It sets the tone, right from the way Vivian’s room and her home is to even the classroom whiteboard that has these hilarious memes I spotted on Instagram. I love the nods to 80s and 90s coming-of-age movies. We’ve got a pep rally scene. There’s a fun reference to Tina Fey’s ‘tank top’ malfunction from Mean Girls in there. And let’s not forget, Amy Poehler’s on screen daughters have come a long way from creating The Burn Book and leading Mean Girls to creating Moxie, a feminist zine, and leading the Moxie Girls! Oh and Poehler finally does become the ‘cool mom’ she promised us in Mean Girls she was! So yay!

Could Moxie have done with a little more moxie? Oh yes, it could’ve.

I love the attention to detail, the Easter eggs and callbacks, I do. And I am appreciative of the makers’ genuine efforts to cover all bases, by making the film more ‘intersectional’, as Lisa says in the film. That being said, I felt there were quite a few things that could’ve been done better.

The dialogues in some places felt a bit inorganic, like the situations and the words said were created to sort of ensure that every possible type of sexism was depicted. It became then like a checklist of things that men do wrong, just so that the Moxie girls could come and call them out on it. Similarly, while I am glad about the male ally angel with Seth, I felt his allyship was a bit too smooth, and his character too… uni-dimensional.

Strangely, something similar began happening with potentially interesting characters, like the other Moxie girls. They were empowered, the spoke up, but immediately the focus would shift back to Vivian, her relationship with Seth or with her mother. I am assuming it was because this is a movie, and we don’t have the time to give each of these characters their time and space to develop, but I still think switching to Vivian’s drama all the time diluted the sheer power that these women could’ve infused in the story.

There were quite a few things that I wish would’ve been done differently in the film, and the mother-daughter relationship between Lisa and Vivian was one of them. It felt a bit odd that Vivian never even spoken to her mother about her younger days of being ‘rebel girl’. Especially, when she has that outburst about being all alone in this, talking to her mother would’ve been quite the breakthrough, the epiphany that inspires her final act of rebellion on the school steps. But that relationship never got a chance to develop. It was something that the trailer had gotten me excited about, a mother passing on her feminist rebellion legacy to her daughter. Alas, that didn’t feel satisfactory.

An extension of this dissatisfaction of mine also concerns Vivian and Claudia’s ‘privilege’ talk, which is one of the many things that the film rushes over, without giving it enough time to sink in as a realisation that could indeed cause change. The same happens with Principal Shelly’s arc, we don’t really get to know if she was fired for her inaction for all this time, or does she finally see the light, or she continues to play blind to the rampant sexism in her school. It makes me wish there’s a Moxie 2, where the girls have to slay another monster in their quest to rid the school of sexism (à la Buffy and Scooby Gang up against Mayor Wilkins).

I don’t think that any of the above things hampered my viewing experience of Moxie. But when it is a film that is so relevant, the afterthought matters much more. And in hindsight, I do think that Moxie had a lot of untapped potential and nuances that it could’ve explore better to make an ironclad film that packed a little more punch.

Moxie is easily a beginner’s guide to smashing the patriarchy, aimed at quiet the varied audience. It can show the teenage girls where to begin, educate teenage boys so they can do better for the women in their lives. And it can jolt the older generations out of their stupor that makes them think if they pass on it, or ignore it, it’ll go away.

Could the film have been more nuanced? Yes. Could it have packed more punch? Definitely. But none of that takes away from the very important stand that Moxie makes against sexism and gender inequality, in a fun, charged and entertaining way. It’s a perfect Women’s Day watch, if you will, for everyone irrespective of age, gender, and status.

Moxie is currently streaming on Netflix.