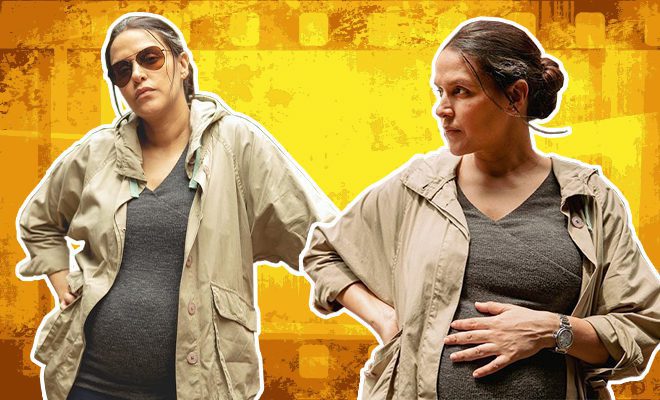 It’s going to be a while before the entertainment industry lets go of the beauty and body standards that it is holding on to. But it won’t be a stretch to say that the grip has loosened up quite a bit. We’re seeing more inclusive casting in movies; OTT content casts actors in the leads based on their talent and the story requirements and not on how they look; and more characters are being written realistically. Which means they can finally act their age and gender, and don’t have to look invincible and unperturbed all the time. Remember when Pooja Bhatt’s Rani, CEO of a bank, was a character grappling with hot flashes from being pre-menopausal? And now, we have Neha Dhupia who is pregnant IRL and playing a pregnant cop on screen too!

A Thursday is an upcoming thriller directed by Behzad Khambata, which stars Yami Gautam, Neha Dhupia, Atul Kulkarni, Maya Sarao and Dimple Kapadia. And it is in this thriller that Neha Dhupia, who is eight months pregnant with her second child with husband Angad Bedi, is playing a top cop who is expecting a baby! Neha took to social media to share some BTS shots of herself from the film, in character as ACP Catherine Alvarez.

In the caption of her Instagram post, she wrote, “Bridging the gap between real and reel life.” She went on to thank the makers of the thriller for giving her the opportunity and support to do this, and dedicated the role to other expectant mothers who’re out there at work, while a whole human grows within them!

“This ones for all the mamas in the making … we make us stronger.”

This isn’t the only work commitment that this mommy-to-be is accomplishing. A few days ago, Neha Dhupia posted another picture to her Instagram, this of her dubbing for another upcoming action thriller flick that she is a part of, called Sanak, that also stars Vidyut Jammwal and Chandan Roy Sanyal. Her caption was all about the real struggles of pregnant women—from the back aches to the burps—and how she never imagined returning to finish her dubbing in her third trimester. But she aced it nonetheless!

Neha Dhupia joins the ranks of thousands of women who continue to work right through their pregnancy, which can’t have been an easy feat. Women truly are incredible creatures, aren’t they? It’s also great that we’re finally writing women characters as they should be written; not the perfect specimen all the time, but with real womanhood struggles which they persist through with scars, or in this case, stretch marks!